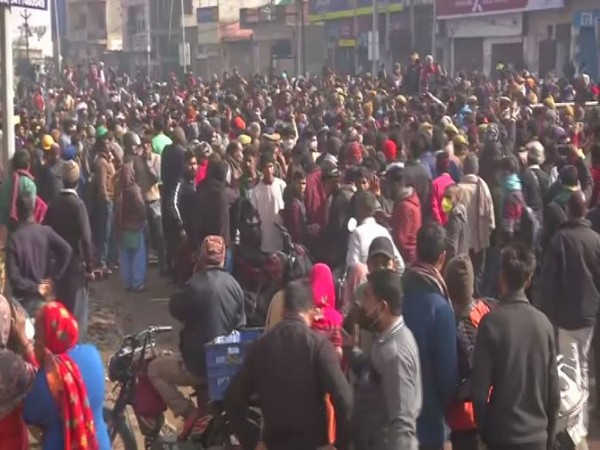 Hundreds of people, including family members of the victims of Sunday’s roof collapse incident, in which 24 people had died and injured over a dozen people, took out a protest and blocked National Highway in Uttar Pradesh’s Muradnagar on Monday.

Police personnel have been deployed to maintain the law and order situation in the area.

“Twenty-four people have died and 17-18 injured in Muradnagar roof collapse incident. Three people have been arrested on the basis of initial investigation. A two-member probe committee constituted to investigate the matter,” SP Rural, Ghaziabad said today.

Meanwhile, Uttar Pradesh cabinet minister Atul Garg this morning paid a visit to the site of the tragedy.

“Currently, our priority is to save the maximum number of lives. The Chief Minister himself sent me here to ensure the proper treatment of the injured. I am going to the hospitals in which the patients have been treated to check the proper arrangements,” the minister said while speaking to ANI.

“A committee has been formed including commissioner and IG who will submit the report in 48 hours in this case,” the minister added.

Talking to mediapersons, Inspector General (IG) Parveen Kumar said: “Relief and rescue operation is underway. We constantly keep in touch with the doctors. Everyone will be punished.”

“We will reveal the final figures of deceased later after investigation,” he added.

A roof of a crematorium in Muradnagar collapsed on Sunday leading to loss of lives and leaving at least 17 people injured.

Chief Minister Yogi Adityanath has taken cognizance of the incident. “I have instructed district officials to conduct relief operations and submit a report of the incident. All possible help will be provided to those affected by the incident,” he said.

On Sunday, Prime Minister Narendra Modi offered condolences to the kin of the people who lost their lives.

Union Defence Minister Rajnath Singh also expressed his condolences to the family of the deceased in the incident.