A video of a man being heckled by a crowd is being shared on social media with a claim that the video is of Rohingya refugees assaulting a man in West Bengal.

“#Rohingya #Muslims push out #Hindus from #WestBengal Shame on @RahulGandhi Shame on @priyankagandhi Shame on @INCIndia #Indians will #teach you a #Lesson very soon,” the post read. 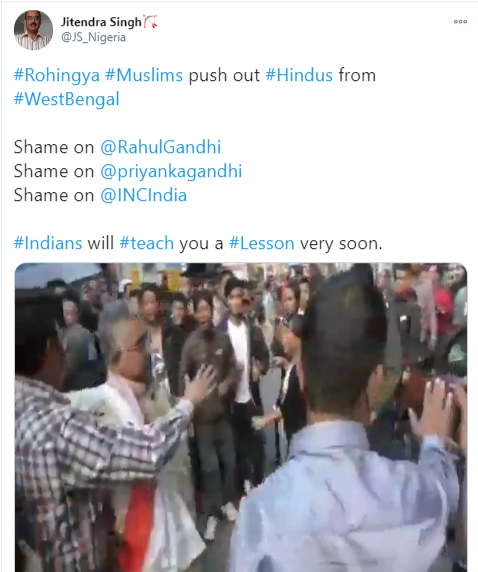 The same video was also shared on Facebook with similar claims.

The links to the posts can be seen here and here.

In the video, we noticed BJP’s Bengal president Dilip Ghosh. So, we ran a keyword search along with a Reverse Image Search on the keyframes from the video.

The search led us to reports by several media organisations from 2017, featuring similar videos.

The title of the news bulletin uploaded by ABP News on October 6, 2017, read “Attack on BJP President Dilip Ghosh in Darjeeling.”

We found that the leader in the video is West Bengal BJP chief Dilip Ghosh and the video is from Darjeeling. In 2017, he was allegedly attacked by activists of anti-Bimal Gurung faction of Gorkhaland Janmukti Morcha.

The same incident was also covered by Republic TV.

In January 2020, NewsMobile debunked the same video, which was falsely being shared with a claim that Dilip Ghosh was attacked while asking for votes in Assam.

Hence, from the above information, it is clear that the video is OLD and the post is misleading and false.