Fact Check: Old Video Of Accident Due To Fog Shared As Recent One; Here’s The Truth | Newsmobile
Thursday, August 11, 2022

A video of cars colliding with each other due to fog is doing rounds on social media claiming to be a recent one. It is being claimed that accident was caused by fog on the Agra-Mathura National Highway.

(Google Translation: “A tradition of accidents caused by fog on the Agra-Mathura National Highway.”)

With the help of keyword search, we found the same video on YouTube dated November 8 2017, claiming that the horrific incident of several cars colliding due to smog happened on the Yamuna Expressway. 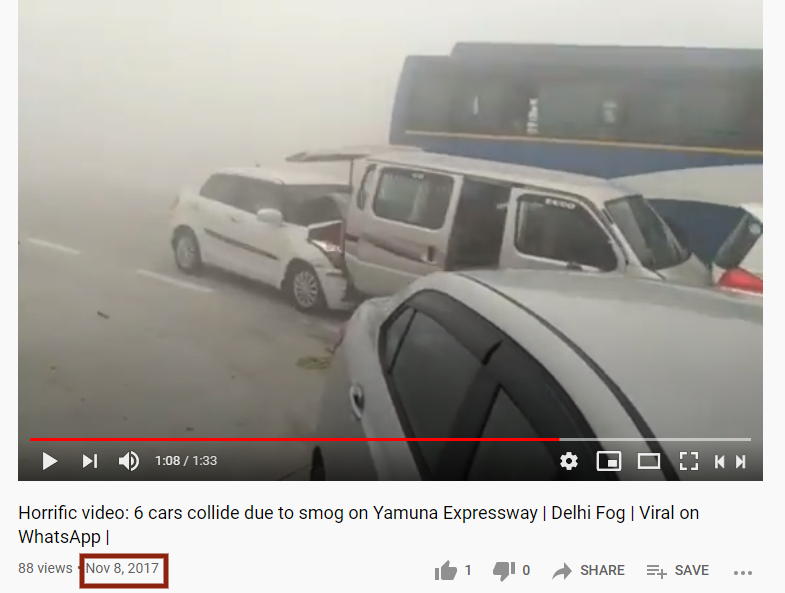 Further, we also found a video report by Aaj Tak dated November 7, 2017, regarding the same accident.

The description of the video read, “Eighteen cars rammed into each other on the Agra-Noida Yamuna Expressway due to low visibility. Speeding cars rammed into one another, while people on the footpath were shouting and requesting the drivers to slow down.”

Moreover, we also found a similar video on Zee News claiming that due to low visibility, several cars collided with each other on the Yamuna Expressway in 2017.

Earlier, in December 2019, NewsMobile had debunked the same video which was falsely being claimed to be from the Mumbai-Pune Expressway.

Fact Checked: Viral video of cars colliding is NOT from Mumbai-Pune expressway

Hence, with the help of the above information, it is clear that an old video of an accident is being falsely shared as a recent one. Don’t fall for misleading claims.