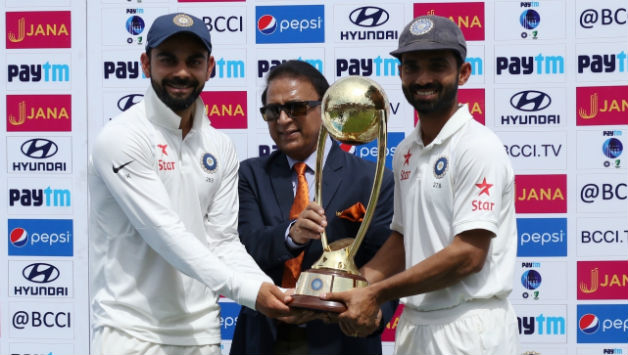 In his latest column, Gavaskar pointed out the difference in the treatment given to Natarajan and skipper Virat Kohli in the context of getting paternity leaves.

In November, while Natrajan was playing lucrative Indian Premier League for the SRH franchise, he became the father of a newly born baby. But, destiny had other plans for him. He is yet to see his new-born daughter as he travelled directly to Australia because of secured bio-bubble.

Opining strongly on this, Gavaskar wrote, “Another player who will wonder about the rules, but, of course, can’t make any noise about it as he is a newcomer. It is T. Natarajan. The left-arm yorker specialist who made an impressive debut in the T20 and had Hardik Pandya gallantly offering to share the man of the T20 series prize with him had become a father for the first time even as the IPL playoffs were going on.”

Sending all our love and good wishes to @Natarajan_91 & Pavithra Natarajan on their new born baby 🧡#SRH #OrangeArmy pic.twitter.com/Sy9RgqbTjJ

“He had become a father for the first time even as the IPL playoffs were going on. He was asked to stay on for the (Australia) Test series but not as a part of the team but as a net bowler. Imagine that. A match-winner, albeit in another format, being asked to be a net bowler. He will thus return home only after the series ends in the third week of January and get to see his daughter for the first time then. And there is the captain (Virat Kohli) going back after the first Test for the birth of his first child,” he added.

Kohli left Australia on December 22 after playing the first Test in which his team suffered a humiliating loss by 8 wickets in the Adelaide Pink-ball Test. Indian team managed to score only 36 runs in the second innings, record the lowest total in a Test match.

This is not the first time when Gavaskar has raised questions on Kohli. He had commented on Kohli’s poor performance and dragged Anushka Sharma into cricket. In one of the IPL games, he said, “During the recent lockdown he only practiced to Anushka’s bowling, I saw a video. But that is not going to be enough.”

Reacting to the veteran’s comment, irked Anushka Sharma posted on Instagram: “Mr. Gavaskar your message is distasteful is a fact but I would love for you to explain why you thought of making such a sweeping statement on a wife accusing her of her husband’s game? I am sure over the years you have respected the private lives of every cricketer while commentating on the game.”

Vice-captain Ajinkya Rahane will lead India in the remaining three Tests in Kohli’s absence. The second Test is scheduled in Melbourne from December 26 followed by matches in Sydney and Brisbane.