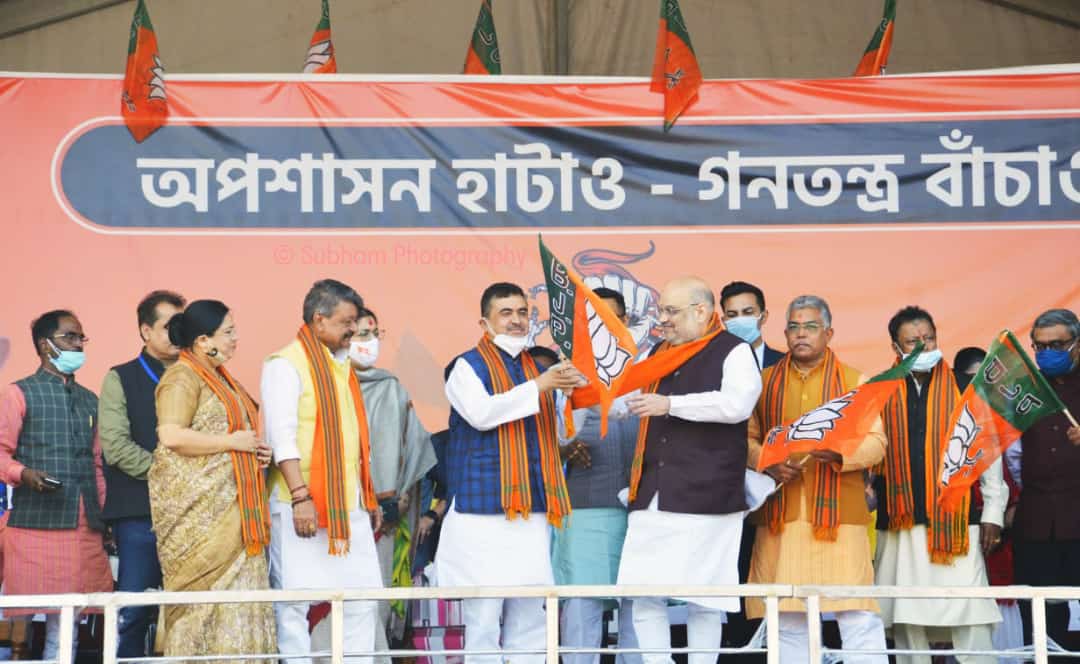 In a big jolt for the ruling Trinamool Congress(TMC), West Bengal Chief Minister Mamata Banerjee’s former aide Suvendu Adhikari joins BJP during Union Home Minister Amit Shah’s rally in West Midnapore district on Saturday. A total of 11 TMC MLAs, 1 former and 1 present TMC MP joined the saffron party on TMC’s turf, which is a wake up call for the TMC, struggling to retain it’s partymen ahead of the 2021 Assembly elections where the BJP is looking to capture 200 of 294 seats.

“Suvendu Adhikari left TMC due to corruption, so you feel he switched sides. By the time election comes, you will be left alone. This is just the beginning.” Said Union Home Minister Amit Shah after Adhikari shared the stage with him while formally joining the saffron party.

Adhikari took the microphone to reach out to his supporters as a BJP leader for the first time. “For the happiness of many, for the welfare of many. Following these ideals, BJP has accepted me. Amit Shah is my older brother. My association with him goes back a long way.” Said Suvendu Adhikari who also referred to Mamata’s nephew and TMC MP as a corrupt leader.

Shah also brought up the attack on BJP President JP Nadda’s convoy on December 10th in Kolkata which included BJP national general secretary Kailash Vijaywargiya and BJP state President Dilip Ghosh’s cars too. “Nadda ji s convoy was attacked by stones if they think we will get scared we say the more violence you do the more strongly the BJP workers will stand up against you. We have lost 300 BJP workers in political killings.”

Shah blamed the TMC for the violence which has allegedly led to the killing of BJP supporters in recent months. “How many people will you kill? The whole of Bengal is standing against you Didi. We all want to bring in change in Bengal . All I want to say, is that the problems of farmers, labourers of Bengal to stop the bombings in Bengal. All this can be done by the BJP under Modi ji’s leadership.” Added Shah.

The TMC did not take the BJP rally and strong accusations MP Kalyan Banerjee addressing a press conference. “The most corrupted party meeting was held today on Midnapore ground. It was empty. When Dilip(Ghosh) started speaking, it became more empty and by the time Amit Shah spoke, no one wanted to listen to him. Garbage of lies.” Said Kalyan Banerjee.

Banerjee also lashed out at Shah for having lunch at a farmer’s house in Belachuri village of West Midnapore district ahead of the rally. “In Delhi you can see farmers revolting. Those who are going against BJP, they say people are arrogant. Just because you go to a farmer’s house does not mean you become their friend.” Added the TMC MP.

Shah will meet partymen in Kolkata later on Saturday while Sunday the Union Home Minister will visit Vishva Bharati in Shantiniketan followed by a roadshow in Bolpur.