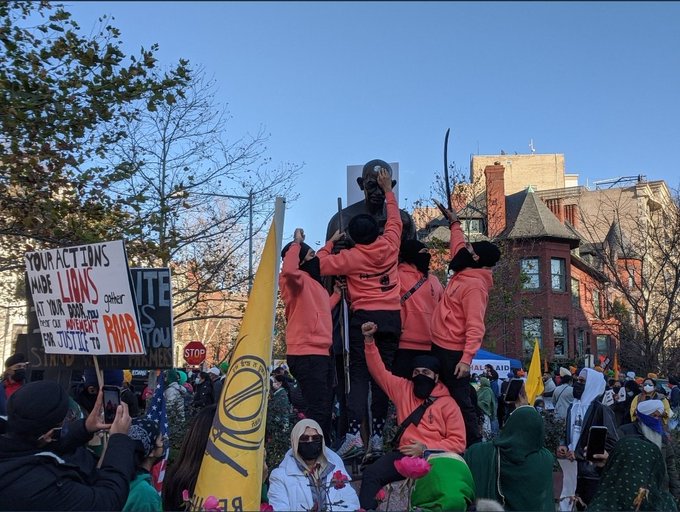 On Saturday during a rally to express solidarity with farmers who are agitating against the recently enacted agricultural laws in India, the statue of Mahatma Gandhi in front of the Indian Embassy was defaced and vandalised by certain “Khalistani elements”.

Posters and banners were seen pasted or propped up against the statue and a yellow flag was sighted draped over it. Some people were also seen waving “Khalistani” flags and raising pro-Khalistan slogans.

The Indian Embassy condemned the “mischievous act” by hooligans which it said “masqueraded as protesters.” Indian Embassy in the United States said on Saturday it has lodged a strong protest with the law enforcement agencies against the “mischievous act” by “Khalistani elements” who masqueraded as protesters and defaced the statue of Mahatma Gandhi in Washington. 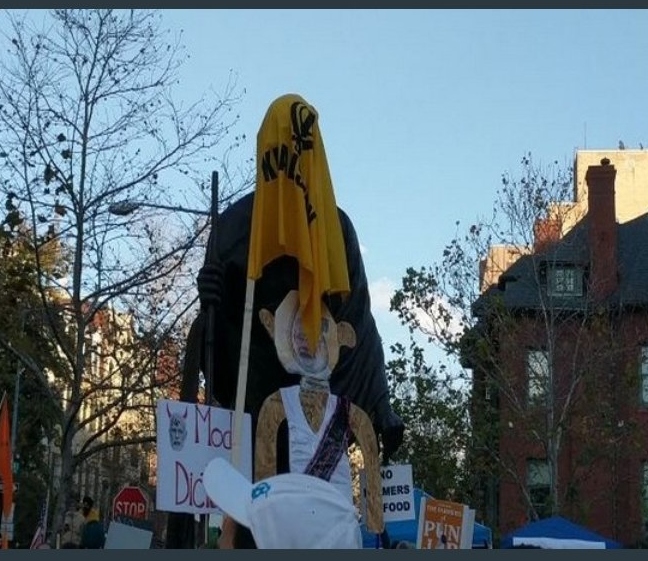 According to a statement by the Embassy, “The statue of Mahatma Gandhi at the Mahatma Gandhi Memorial Plaza in front of the Embassy was defaced by Khalistani elements on 12 December 2020. The Embassy strongly condemns this mischievous act by hooligans masquerading as protesters against the universally respected icon of peace and justice.”

“The Embassy has lodged a strong protest with US law enforcement agencies and has also taken up the matter with the US Department of State for an early investigation and action against the culprits under the applicable law,” it added.

“This protest is not particularly against the government but in support of the farmers. It is against the current administration there. We see this bill as eradication of our culture,” Mansimran Singh, one of the organisers of the protest, told news agency ANI.

“For me, we are just another group that supports the farmers. Where does Khalistan come from? In the last 35 years, you have seen this activism grow. Why doesn’t India ask that question to its own people or its own government as to why we have this. In America, when someone talks about secession we ask them why,” he said.

Speaking on the defacing of Mahatma Gandhi’s statue, he said, “In America, all confederate statues were vandalised and now they have been taken down. So why not him?”

On the Khalistan flags being spotted during the protest, he said, “The organisers will raise the Khalistan issue on another platform on another day. We want the media to concern on the farmers’ issue. This is not a regional issue.”

This is the second time this year that the Mahatma’s statue was defaced. On June 3 during the George Floyd protests, the statue was vandalised by unknown persons. Post the desecration, an expert was called in to refurbish the statue.

The statue of Mahatma Gandhi was unveiled by then prime minister Atal Bihari Vajpayee on September 16, 2000, in the presence of then US president Bill Clinton.