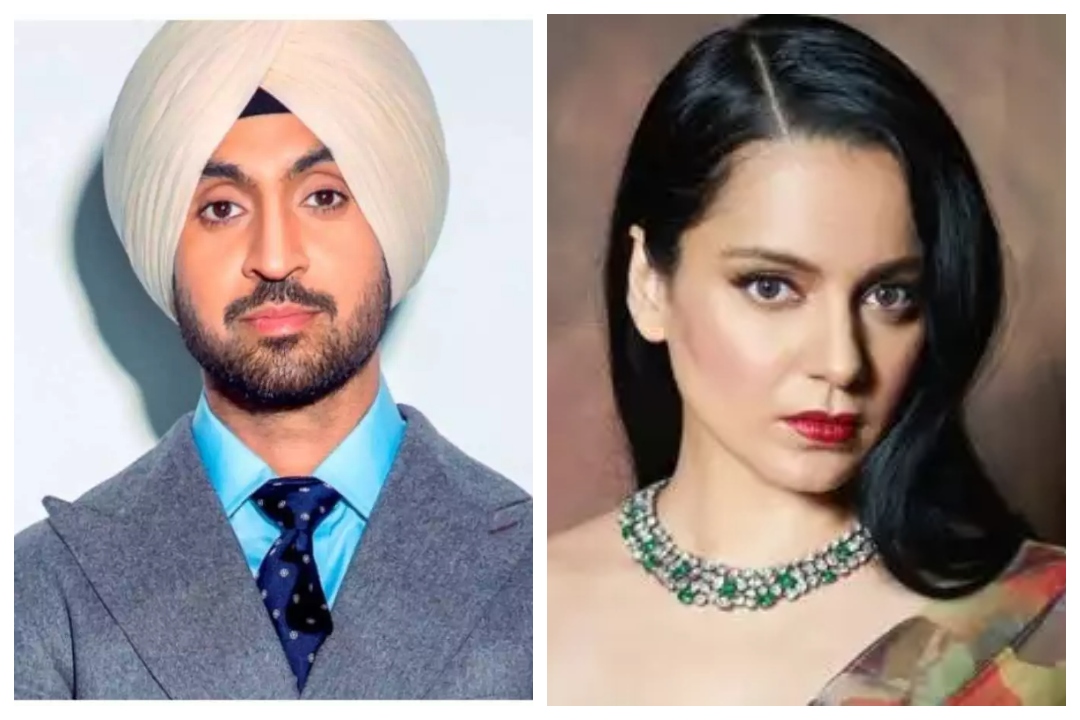 It was a no holds barred slugfest between singer and actor Diljeet Dosanjh and actor Kangana Ranaut on Thursday as Twitter overflowed with caustic comments between the two.

The war of tweets that began on late Wednesday turned ugly on Thursday. The heated argument was over a tweet that consisted of false information shared by Kangana which was later deleted. In the tweet she mi wrongly identified an elderly woman (Mahinder Kaur) at the farmers’ protest in Delhi as Bilkis Dadi, one of the organizers of the Shaheen Bagh demonstration against CAA-NRC. Bilkis was recently featured in the TIME 100 list.

In a series of lengthy unpleasant arguments, Diljit lambasted Kangana for sharing wrong information, and corrected her by sharing a video interview as proof, in response she called him ‘ Karan Johar ka Paltu’.

Kangana Ranaut, who has been in controversy for some time for her tweets have been targeting farmers’ protests as a misguided movement.

In her tirade against Diljit, she argued that “The Dadi who was protesting at Shaheen Bagh for citizenship, that same Bilkis Bano Dadi was also seen protesting for farmers and she refused to recognize Mahinder Kaur. She called it a Drama and asked Dijit to Stop it.”

This didn’t end here, replying to Kangana’s pet jibe, Diljit responded, “Are you a pet of whoever you have worked with? The list will be long then. This isn’t Bollywood, this is Punjab. You know how to play with people’s emotions.”

After this Kangana’s fury had no end, attacking Diljit she wrote, “Oh come on you bootlicker, the ones you butter up to get work, I teach them lessons every day. Don’t get too excited. I am Kangana Ranaut, not a bootlicker like you who will lie, I only commented on Shaheen Bagh protester.”

To this the Udta Punjab actor grilled Kangana for alleging that demonstrator Manjit Kaur had joined the protest for ₹ 100, just like Dadi Bilkis Bano.

Diljit shot back saying, “You have no sense how to speak to someone’s mother or sister. You are a woman yourself and are saying that another woman would work for Rs 100? Our mothers of Punjab are like God to us. You have poked the hornet’s nest. Google this Punjabi now.”

Things took nasty turn as this argument saw no end, Kangana called herself a lioness and Diljit a vulture, on the other hand Diljit called her brainless, mannerless and egoistic. This was one of the ugliest spat that India has witnessed.

The “Queen” star has been constantly defending the Centre over farmers’ movement and has labelled them as misguided and motivated against national interest.

Kangana has been sent a legal notice as well by advocate Harkam Singh for her comments against Mahinder Kaur. In the legal notice dated November 30, he suggested Kangana should have authenticated information before posting it on social media and demanded an apology over her tweets.