Famer associations have been up in arms against the Centre over the farm laws which have been rolled out recently. Thousands of farmers have marched down to Delhi and started blocking borders saying they will not relent till the time the laws are rolled back.

Amid the protests, a picture of a woman wielding a lathi (stick) at policemen has gone viral all over social media claiming to be from the recent protest. It is being said, drawing a parallel, that the woman in the picture is the real Queen of Jhansi who has jumped in for rights of farmers on the battlefield.

(Translation: If you have seen the fake queen of Jhansi, now see the real queen of Jhansi who has jumped for the rights of the farmers on the battlefield…Salute to you mother…# Gautam) 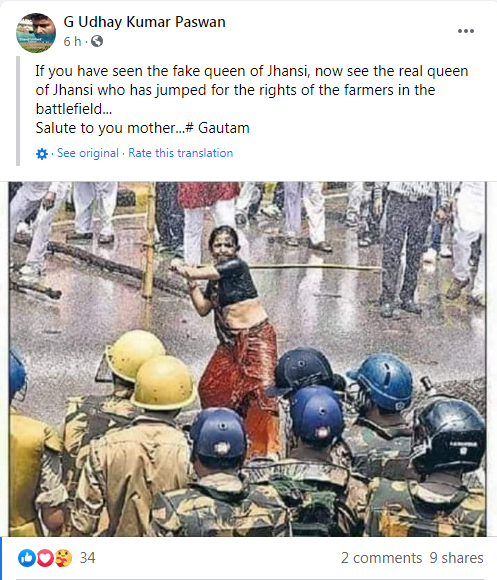 On putting the picture through Google Reverse Image Search, we found the same picture on Facebook dated October 6, 2018, which gave us a clue that the picture is old.

Further, we also found that the same picture was shared on another Facebook Profile on October 5, 2018. 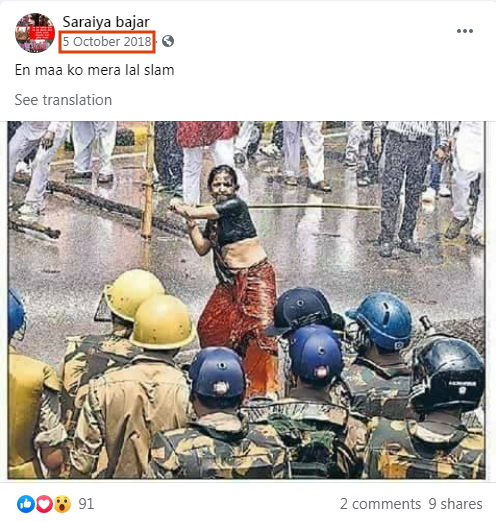 Moreover, with the help of Bing Reverse Image Search, we found that the same picture was shared on Facebook dated September 10, 2016, by Hyderabad Funny Club.

However, we could not track the origin of the picture. But surely the picture is old and not from the recent farmers protest.

We also searched for some pictures of women participating in the farmers protest. We found a video report by The Tribune dated September 27, 2020, with the video description, “Women members of a farmers organisation block railway track near Amritsar to protest farm laws.”

Hence, the picture of a woman showing lathi to policemen is not from the recent farmers protest. Don’t fall for misleading claims.