Lest We Forget: 12 Years After 26/11 Mumbai Attacks, Pakistan Continues To Live in Denial | Newsmobile
Thursday, December 1, 2022

It was just another happening night in the city of dreams. But in a split second and the excruciating hours that followed, all changed forever.

On the night of November 26, 2008, 10 heavily armed Pakistani terrorists of the Lashkar-e-Tayyiba (LeT) launched a coordinated attack at five locations in Mumbai. Over 160 people lost their lives while more than 300 were left injured in the cold-blooded attacks.

Twelve years down the line, Pakistan continues to live in denial with the blood of several innocents on its hands.

On November 11, 2020, Pakistan’s top investigating body, the Federal Investigation Agency (FIA) finally admitted that 11 terrorists involved in the 26/11 Mumbai attacks were from Pakistan.

#MumbaiAttack We will never forget, we remember those who lost their lives in Mumbai. Let’s renew our pledge to fight the scourge of terrorism together, and democracies need to come together to eliminate it #2611Attack do check out this special @NewsMobileIndia tribute https://t.co/TBDLyI80dP

The updated ‘Book on Most Wanted/High Profile Terrorists’ released by Pakistan mentions over 1,200 names including the terrorist who purchased the boat for the 26/11 attack. However, it does not mention Lashkar-e-Taiba chief Hafiz Saeed, the mastermind of the attack, and also wanted underworld don, Dawood Ibrahim.

Despite not being named in the list, Hafiz Saeed, a UN-designated terrorist, was on Nov 19 sentenced to a 10-year term in jail by a Pakistan court for two terror cases. Earlier in February this year, Saeed was convicted of terror financing charges in two other cases and was sentenced to two concurrent prison terms of 5.5 years each. Yes, concurrent.

Hafiz Saeed is wanted in India for planning the 26/11 terror attacks. He is also described as a “global terrorist” by the United States, which has put a $10 million bounty on Saeed’s head. Pakistan, however, did not show the spine to take strict action against Hafiz despite all this.

Saeed was arrested in Pakistan in July last year for terror-financing charges only after the country found itself under severe international pressure to come clean.

Even years after the loss of several innocent lives and availability of ample evidence, Pakistan is yet to declare Hafiz Saeed, an internationally proscribed terrorist, as the mastermind of the 26/11 Mumbai terror attack.

When talking about terrorists from Pakistan’s soil carrying out terror attacks in India, we cannot miss out on last year’s Pulwama attack in which around 40 CRPF personnel lost their lives.

However, the name of Jaish-e-Mohammed chief Maulana Masood Azhar, who took responsibility for the attack, was also not mentioned in Pakistan’s updated ‘Book on Most Wanted/High Profile Terrorists’. Notably, Azhar was also designated as an international terrorist after the Pulwama attack in February last year.

Considering Pakistan’s attitude towards terrorists and its history of fostering terrorism, this did not come as a surprise either.

While India has been leaving no stone unturned in calling out Pakistan for promoting terrorism by sheltering and ‘nurturing’ terrorists, Pakistan is yet to listen to its conscience.

However, the fight against terrorism must go on until we avenge the fallen. Lest we forget. 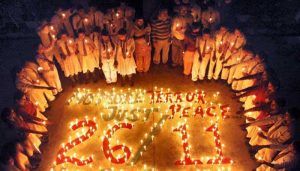