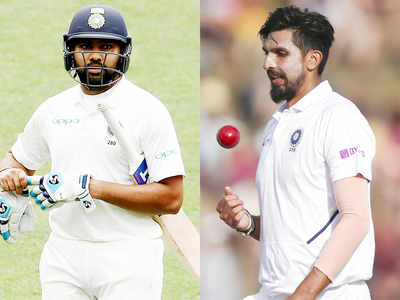 India opener Rohit Sharma and pacer Ishant Sharma’s fate lies in the hand of Board of Control for Cricket in India (BCCI) president Sourav Ganguly as he will negotiate quarantine terms with Cricket Australia as the duo need relaxation in rules if they have to play the Test series against Australia, starting December 17.

According to sources, Ganguly will discuss the situation with Cricket Australia and will look to find a solution to the issue as the two cricketers are undergoing rehabilitation at the National Cricket Academy (NCA) in Bengaluru with an eye on the Four-Test series.

“The BCCI president will discuss with Cricket Australia and a decision will be taken after their meeting. The current quarantine guidelines might make it impossible for the two to reach Australia and be a part of the Test series. The rest of the Indian cricketers were allowed to train during the quarantine period because they moved from one bubble to the other in Sydney,” the source explained.

The course of Rohit and Ishant’s rehabilitation at the NCA has been nothing short of a mystery novel with fresh twists and turns every day. While NCA head Rahul Dravid had earlier said that Ishant would be fit for the Tests, there are now questions on whether he would be ready for the rigors of Test cricket.

While Ishant had traveled to NCA mid-way into the IPL, Rohit reached the NCA last Thursday to complete his rehabilitation after he injured his left hamstring during the recently concluded Indian Premier League in UAE.

“The BCCI Medical Team has been monitoring Rohit Sharma’s fitness and has briefed All-India Senior Selection Committee on the same. In consultation with Sharma, it has been decided to rest him for the ODIs and T20Is in Australia to regain full fitness and he has been included in India’s Test squad for the Border-Gavaskar Trophy,” the BCCI said in a release on November 9.

The first Test is set to be played under lights from December 17 to 21 at the Adelaide Oval. The second is the Boxing Day Test which will be at the Melbourne Cricket Ground from December 26 to 30.