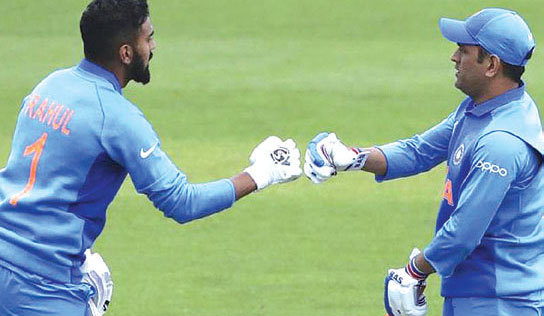 India wicket-keeper batsman KL Rahul is ready to go against one of the most lethal bowling line up. The orange cap holder of IPL 2020 remembered Captain Cool for his wicket-keeping acumen. He said that MS Dhoni has shown the way to all the players as to how to do the role perfectly in different situations.

Rahul’s remark comes as India gets ready to lock horns against Australia in three ODIs, three T20Is, and four Tests. The first ODI will be played on Friday at the Sydney Cricket Ground. MS Dhoni had retired from international cricket in August this year. The Virat Kohli-led side will be without the services of Rohit Sharma as the right-handed batsman is currently at the National Cricket Academy (NCA) to gain his full fitness. Rahul is also the vice-captain of India’s white-ball team in the absence of Rohit.

“Look, obviously nobody can fill the place of MS Dhoni, he has shown the way to the wicket-keeper batsman on how to do the role perfectly, I think I will probably go and give the spinners the feedback regarding what length can be bowled on different wickets. Wicket-keepers have this responsibility, and I have done this job in New Zealand, so hopefully, I can do the same going ahead,” said Rahul during a virtual press conference.

Rahul will be entering the white-ball series against Australia with good form behind him. The Kings XI Punjab skipper scored 670 runs in 14 matches in the recently concluded IPL and he also won the Orange Cap (most runs in a single edition of the IPL).

“I would not call my batting as power-hitting, it is not something that I am blessed with, I try to play the role I feel the team requires me to play at that moment, I have learned to stay in the moment, that is something I have really worked on and as you grow older, you realize that you need to keep on getting better, I am blessed that I get to interact with the best players in the world, I am always looking to grow,” said the 28-year-old.

In the next three years, India will be playing three World Cups and Rahul said that the team is currently not thinking too far ahead.

“Nothing has been told to me, we as a team are not thinking that far ahead, World Cups are important, that is the long vision for every team but I think for me, we are still taking it one game at a time, and if I keep putting consistent performances as a keeper and batsman, it gives us the choice of playing an extra batter or bowler. If I can keep in the coming three World Cups, I would love to do it for my country,” said Rahul.

After the white-ball leg, both sides will shift their attention to the longest format of the game. The first Test between India and Australia will be a day-night contest, beginning from December 17 in Adelaide.

The four-match series will be a part of the World Test Championship (WTC). Australia is on top of the standing while India is at the second position after ICC altered the points system for WTC due to the coronavirus pandemic.