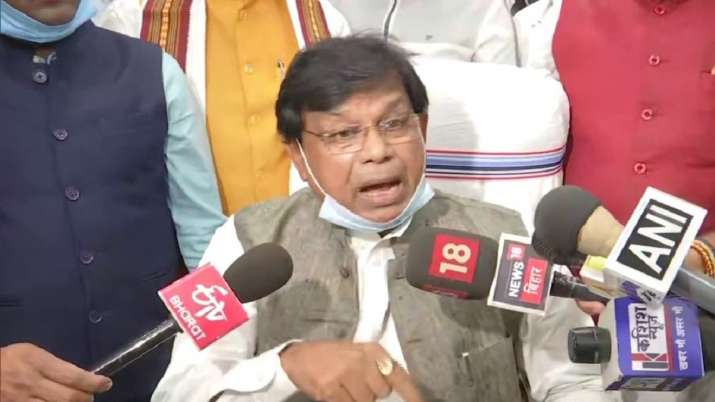 In a dramatic turn of events, barely one and a half hours after taking over as the Education Minister, Mewalal Chaudhary resigned from the Nitish Kumar Kumar cabinet over allegations of corruption levelled on him by a belligerent Opposition.

Pleading innocence, Mewalal – who was sworn in as a minister merely 72 hours back – said, “An accusation is proven only when a charge sheet is filed or a court gives an order and none of the two is there to prove the allegations against me.”

The matter snowballed into a major controversy after Tejashwi Yadav-led RJD shared an old video of Chaudhary singing the National Anthem incorrectly. “Bihar Education Minister Mewalal Chaudhary, accused of several corruption cases, does not even know the National Anthem. Do you have any shame left, Nitish Kumar Ji? Where have you sunk your conscience?” RJD attacked JD(U) on Twitter.

The video of Mewalal has since gone viral and he is being trolled online. Mewalal while hoisting the flag, forgot the words of the National Anthem. He was surrounded by children and a few adults as he saluted the national flag.

“Corrupt JD(U) MLA Mewalal has been given a ministerial position by Nitish Kumar. This is the double standard of Nitish Kumar, the patron of 60 scams. This man can fall to the lowest level for a chair. He is facing serious and heinous charges under the Indian Penal Code including criminal conspiracy (120B), cheating and dishonesty (420), (409), (468), (471),” Tejashwi said.

Mewalal Chaudhary was also suspended from the JD(U) in 2017 after a case was registered against him over alleged irregularities in appointments during his tenure as the Vice-Chancellor of the Bihar Agriculture University in Bhagalpur district.