Fact Check: No, ABP News did not tweet about re-imposition of lockdown in December 2020; Here’s the truth | Newsmobile
Sunday, June 26, 2022

A screengrab of a tweet by ABP News has gone viral on social media claiming that the Centre has announced a complete lockdown will come into effect from December 2020.

The screengrab read, “PM @narendramodi Growing covid cases in India were said to be…….Will again start Lockdown! Due to the increase of cases in india fast.. This time there will be no freedom in lockdown…And this will be applicable from 01 Dec 2020..”

NewsMobile fact-checked the above post and found it to be morphed and false.

We got our first clue when we saw the screengrab carefully and found some patches on it. Also, the writing style was informal and grammatically incorrect. 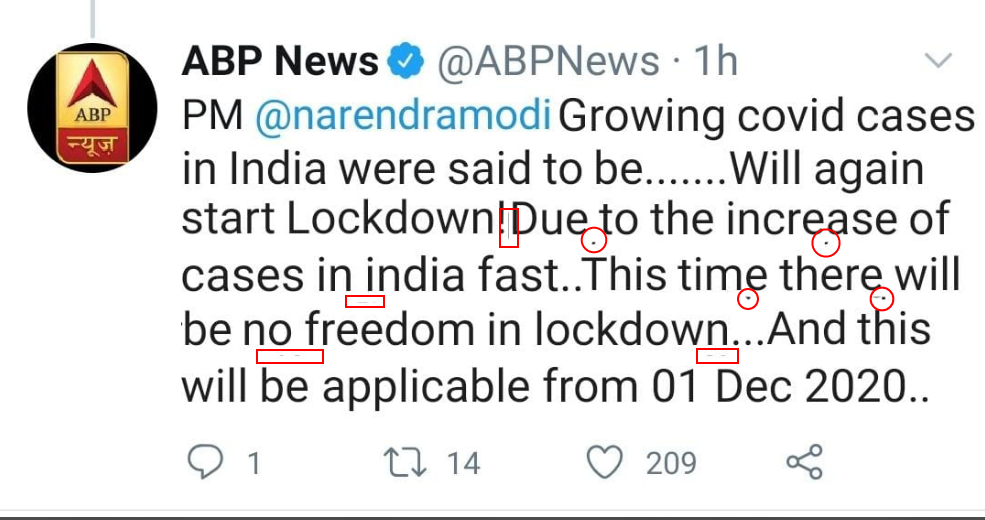 Moreover, we then compared the viral screenshot with the desktop view screenshot and Twitter Deck screenshot.

On digging further, we ran the viral screenshot of ABP News tweet through Google Reverse Image Search and found tweet dated November 12, 2020, claiming it to be fake.

Fake & Fabricated tweets of @ABPNews circulating on #WhatsApp about #Lockdown2 in #india pic.twitter.com/zaYsQXRTRg

Taking a cue, we ran another keyword search and found a tweet from the Press Information Bureau (PIB) dated November 12, 2020, claiming that the ABP News viral tweet about nationwide lockdown is morphed.

A tweet allegedly posted by a prominent media outlet claims that due to the growing number of #COVID19 cases in the country, the Govt. is going to re-impose a nationwide lockdown from 1st December#PIBFactCheck: This tweet is #Morphed. No such decision has been taken by the Govt pic.twitter.com/8Urg7ErmEH

In conclusion, we can say that the social media post in question is morphed and fake.