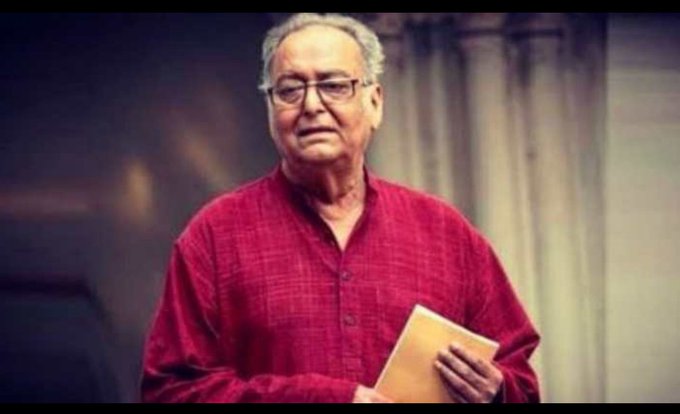 Veteran Bengali actor Soumitra Chatterjee passes away at Belle Vue hospital in Kolkata on Sunday at 12:15pm. West Bengal Chief Minister Mamata Banerjee is visiting the hospital after hearing the news of the actor’s demise.

85 year old Chatterjee who is a Dada Saheb Phalke award winner, had contracted COVID-19 on October 6th and was hospitalized. Though he later tested negative, COVID encephalopathy had set in leading to various complications. Following complications, Chatterjee had undergone the first plasmapheresis on Thursday and tracheostomy on Wednesday according to doctors treating him.

The doctor had also said, “We tried steroids, immunoglobulin, cardiology, anti- viral therapy, immunology everything,” the doctor said adding a huge team of specialists from the fields of neurology, nephrology, cardiology, critical care medicine, ID specialists had put in a lot of effort to revive him in the past 40 days.” As the actor’s neurological condition worsened on Friday, an EEG had shown that there is very little activity in the brain.

Chatterjee’s family had accepted the grim health condition of the actor as informed by doctors treating him.

The legendary actor debuted in Satyajit Ray’s masterpiece ‘Apur Sansar’ and acted in 14 of Ray’s films. The actor went on to do many other films and received France’s highest civilian award, the coveted Legion of Honor, being the seventh recipient of this award. He won two National Film Awards as an actor and for his stint in Bengali theatre too, he received the Sangeet Natak Akademi Award in 1998. This award is given by the Sangeet Natak Akademi, India’s National Academy of Music, Dance and Drama.