Fact Check: No, Donald Trump is not smashing things after losing US elections; Here’s the truth | Newsmobile
Thursday, August 18, 2022

A video of  US President Donald Trump smashing things has gone viral all over social media claiming that he is destroying things after his defeat in the US presidential elections.

(Translation: After hearing the news of the defeat, the uncle of blind devotees became mad. The sabotage in the studio. Hhhhhhh) 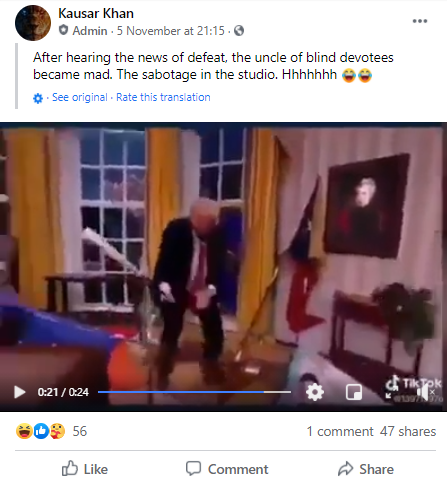 With the help of keywords search, we found the original video on YouTube by Comedy Central UK dated July 21, 2017.

In the video, we found that the man is not real Donald Trump but an American writer, actor, and comedian Anthony Atamanuik. The name of the comedy show is ‘The President Show’, which is just created for humour.

At the time duration of 3:48, we can see the original clipping.

We then compared the viral video and the original video.

Hence, the viral social media video is not of real Donald Trump. Truth is that the viral video is an old video clipping taken from a comedy show ‘The President Show’ and the man smashing things was an actor.