Leaving Donald Trump far behind in the race to the White House, Joe Biden emerged as the President-elect of the United States of America. His running mate Kamala Harris is now gearing up to be sworn in as the new Vice-President.

However, the Google translation of the tweet claimed that Pak PM Imran Khan addressed the newly elected leaders as corrupt leaders.

(Here’s the Google Translation: ۔@JoeBiden And @KamalaHarris Congratulations on holding the World Summit on Democracy of the newly elected President. I look forward to working with the corrupt leaders to cover up the stolen national wealth and eradicate illegal tax havens. We will continue to work with the United States for peace in Afghanistan / the region) 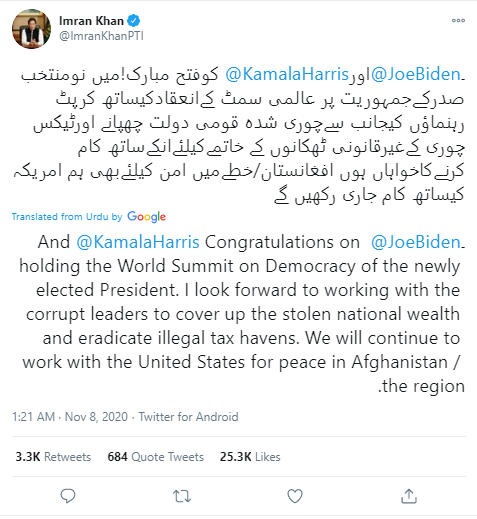 The Facebook post read, “#ImranKhancalling #JoeBiden and #KamalaHarris corrupt leaders and wants to work with them to cover up the stolen national wealth…! ”

The archive link to the above post was found here.

We found that several social media users posting the screengrab of the tweet which can be found here and here. The archived version can be seen here and here.

We searched for other translation websites. We put the exact content of Pakistan Prime Minister Imran Khan’s tweet on Translator.eu.

Translator.eu translate read, “۔@JoeBiden Other @KamalaHarris I want to work with the newly elected President to hide the national wealth and eliminate illegal tax evasion, including the world summit on democracy.” (rough  translation) 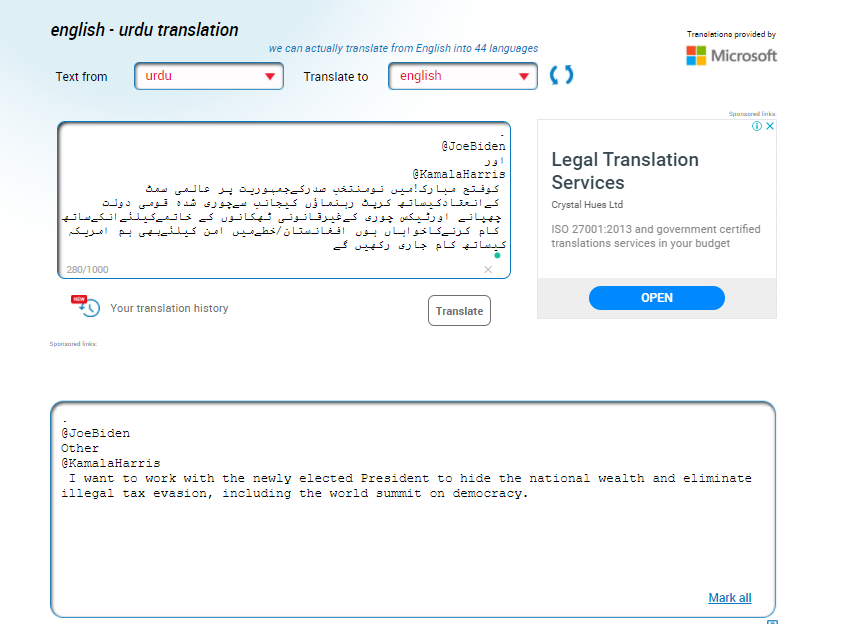 Moreover, we also verified the Urdu tweet on LingvaNex.

LingvaNex translation read, “ JoeBiden And KamalaHarris Congratulations! I am committed to holding the World Summit on the Democracy of the newly elected President. We will continue to work with the United States for peace in Afghanistan.” (rough translation)

On digging further, we also found another similar tweet of Pakistan PM Imran Khan in English language on November 8, 2020. In the tweet, Imran Khan is congratulated US President-elect Joe Biden and Vice President-elect Kamala Harris for their victory in the US elections 2020.

The tweet read, “Congratulations @JoeBiden & @KamalaHarris. Look forward to President-Elect Biden’s Global Summit on Democracy & working with him to end illegal tax havens & stealth of nation’s wealth by corrupt ldrs. We will also continue to work with US for peace  in Afghanistan & in the region”

Congratulations @JoeBiden & @KamalaHarris. Look forward to President Elect Biden’s Global Summit on Democracy & working with him to end illegal tax havens & stealth of nation’s wealth by corrupt ldrs. We will also continue to work with US for peace in Afghanistan & in the region