As eighth round of military talks begin between India and China, General Rawat warns of larger conflict | Newsmobile
Tuesday, July 5, 2022

Home China As eighth round of military talks begin between India and China, General... 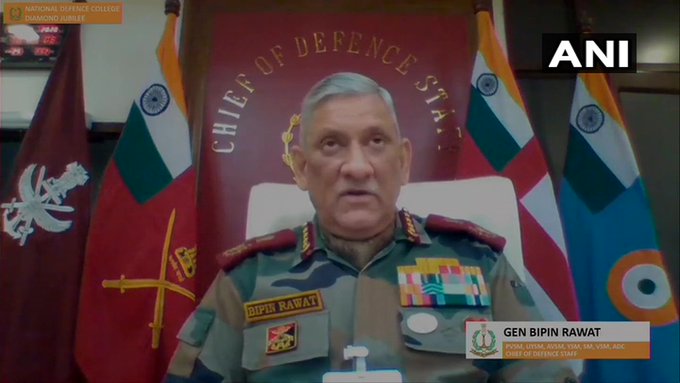 Chief of Army Staff General Bipin Rawat on Friday raised caution on China and said that a “larger conflict can’t be discounted”. General Rawat spoke of the Line of Actual Control(LAC) along Eastern Ladakh region being “tense amidst transgressions and belligerent actions by the Chinese”. He added that the border confrontations and unprovoked tactical military acts “spiralling into larger conflict can’t be discounted”. General Bipin Rawat said, “Our posturing is unambiguous; we will not accept any shift in the Line of Actual Control.”

The Chief of Defence Staff was speaking at a webinar organized by National Defence College in Delhi. “The People’s Liberation Army (PLA) is facing unanticipated consequences of its misadventure in Ladakh because of Indian Army’s firm and strong response. Our posturing is unambiguous-status quo has to be restored and we’ll not accept any shifting of LAC. A full-scale conflict with China is low on probability, but border confrontations and unprovoked tactical military acts spiralling into larger conflict can’t be discounted.” Said General Rawat.

“Pakistan has continued to remain the epicentre of armed Islamic insurgency and terrorism. For three decades now, the Pakistan army and it’s intelligence agency ISI have been waging a proxy war in J&K.” Added The Chief of Defence Staff on Pakistan provoking a proxy war.

“In the coming years, we will see our defence industry growing exponentially and contributing to the overall defence preparedness and deliver us state-of-art weapons and equipment fully made in India. As far as defence cooperation is concerned, we understand the importance of leveraging defence diplomacy in building mutual trust and partnerships with strategically important countries.” Predicted General Rawat.

Speaking on the country’s challenges the Chief of Defence Staff said at the webinar, “As India grows in stature, security challenges will rise proportionately. We must move out of the constant threat of sanctions or dependency on individual nations for our military requirements…and invest in building long-term indigenous capability for strategic independence and application of decisive military power to squarely meet present and emerging challenges.”

ALSO READ: Locals to get 75% reservation in Haryana

Tension between India and China continue since May which escalated to 20 Indian soldiers and an undeclared number of Chinese soldiers losing their lives in skirmishes along the LAC in June in Galwan valley in the Eastern Ladakh region.

After seven rounds of military talks between the two countries and as the eighth rounds of talks begin On Friday, to move towards de-escalation and disengagement from both sides, General Rawat’s comments become significant as there is yet to be a breakthrough with these talks.

Nearly 50,000 Indian Army troops are currently deployed in a high state of combat readiness in various mountainous locations in eastern Ladakh in sub-zero conditions. The People’s Liberation Army(PLA) too has equal number of soldiers along the border ready for combat.

Several Attempts Made On My Son’s Life During Elections, Says Sidhu...