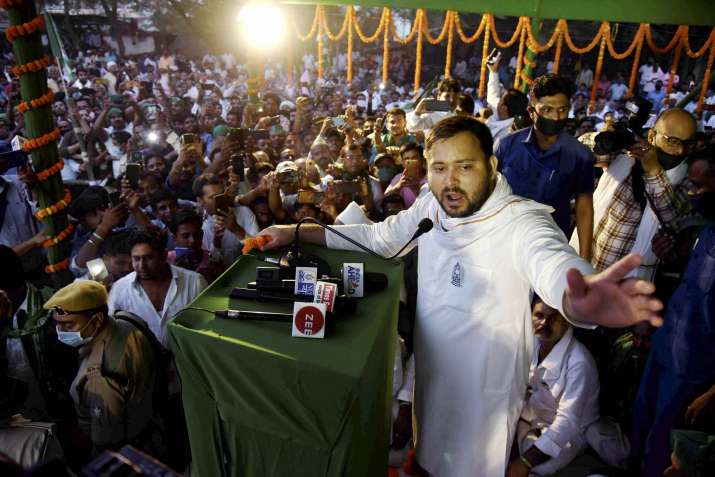 Chief Ministerial candidate and former Dy CM of Bihar Tejashwi Yadav has set a new record in Indian politics after he held 17 public meetings and two roadshows during the campaign for the second phase of Bihar elections.

Tejashwi broke his father’s record of holding 16 public meetings in a day. He held his first rally in Sitamarhi at 10:05 am on Saturday while the last rally was conducted in Vaishali at 4:45 pm. These rallies were conducted in six districts of Bihar that will go to polls on November 3.

Also read: Battle for Bihar: Phase 2 voting on Tuesday – All you need to know

Tejashwi’s popularity is increasing with each passing day. Amidst vitriolic attacks by the NDA leaders, former Dy CM has managed to make the fight really tough for the saffron camp. Tejashwi’s employment pitch has garnered support from the people of Bihar. In order to fulfill his ’10 lakh jobs’ promise, he is even ready to deduct the salaries of ministers and legislators.  “CM Nitish Kumar always says from where will I get money to provide employment to 10 lakh people. Let me tell you that Rs 80,000 crore of the state budget is more than enough. If the need arises, we will cut the salaries of Chief Minister and other ministers to fulfill promises,” says Tejashwi.

Tejashwi has also claimed that its government will set up employment centers in every district and increase the benefits under the MNREGA scheme. The RJD leader is also mulling to form a Farmers Commission, Business Commission, Youth Commission, and Sports Commission in Bihar.