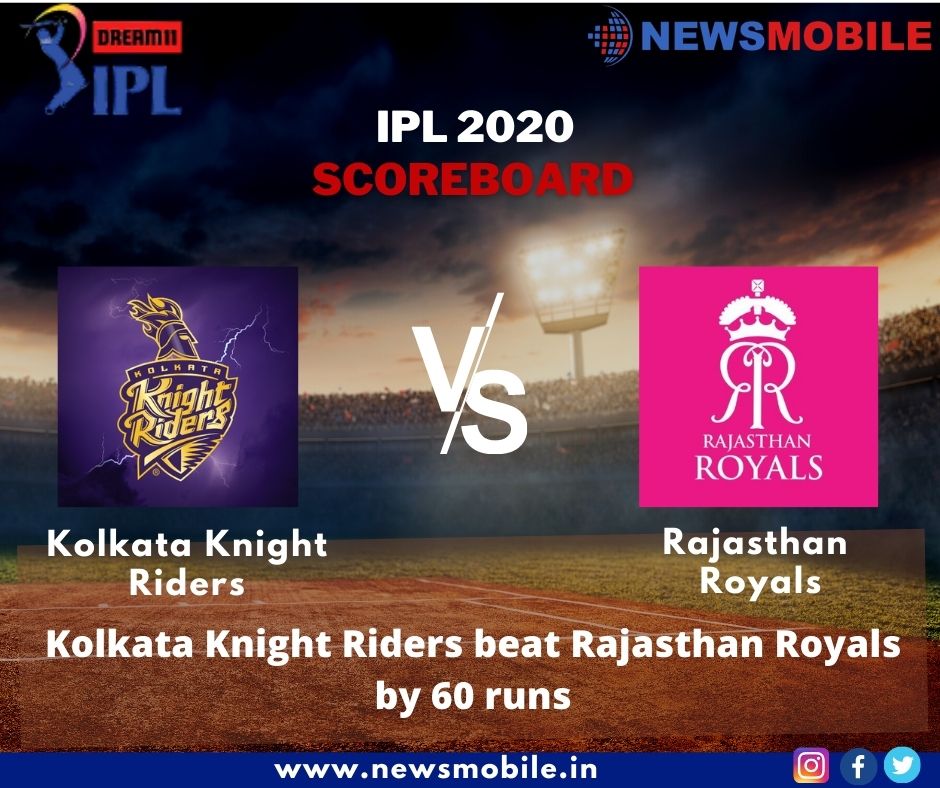 With this win, KKR have moved to the fourth spot in the points table with 14 points from 14 matches. On the other hand, Royals are now out from the playoff contention after losing the match against Kolkata.
Chasing 192, Royals scored 19 runs off the first over, but Robin Uthappa (6) also ended up losing his wicket to Pat Cummins. In the third over of the innings, Cummins dismissed Ben Stokes (18) owing to a spectacular catch from Dinesh Karthik and five balls later, Steve Smith (4) was sent back, reducing Royals to 32/3.

Sanju Samson (1) was also caught behind off the bowling of Shivam Mavi and Riyan Parag (0) was dismissed by Cummins and as a result, Royals were left staring down the barrel at 37/5.

Rahul Tewatia and Jos Buttler then got together at the crease and the duo put on 43 runs for the sixth wicket, however, the stand was broken in the 11th over by Varun Chakravarthy as he dismissed Buttler (35), reducing Royals to 80/6.

In the end, Royals failed to get any sort of momentum and the side was restricted to 131/9.

Earlier, Eoin Morgan played an unbeaten knock of 68 runs as KKR posted a total of 191/7 in the allotted twenty overs.

Sent into bat first, KKR did not get off to a good start as the side lost Nitish Rana (0) in the very first over as he was sent back to the pavilion by Jofra Archer. Rahul Tripathi then joined Shubman Gill in the middle and the duo retrieved the innings for KKR.

Both batsmen put on 72 runs for the second wicket, but Royals came back strongly as the side dismissed Gill (36) and Sunil Narine (0) in quick succession, reducing KKR to 74/3 in the 9th over.

Three overs later, Rahul Tripathi (39) also gave his wicket away off the bowling of Shreyas Gopal, and in the very next over, Rahul Tewatia dismissed Dinesh Karthik (0), leaving KKR in a spot of bother at 99/5 in the 13th over.

Andre Russell next joined skipper Eoin Morgan in the middle and the duo put on 45 runs for the sixth wicket, but with KKR gaining the upper hand, Royals once again came back into the match as Kartik Tyagi dismissed Russell (25), reducing KKR to 144/6 in the 16th over.

Morgan and Cummins led the charge for KKR in the final two overs, as the duo smashed 33 runs off the final 12 deliveries, and as a result, the side posted a total of more than the 190-run mark.