A picture collage of Congress party leaders is doing the rounds on social media. It is claimed in it, that Congress leaders were found partying at a farmhouse while people in Hyderabad were witnessing heavy rainfall.

(Translation: The people of Hyderabad are worried because their houses are submerged in water due to heavy rain. And on the other hand, Congress Muslims leaders were found partying in the Farm House.)

We found that there were a set of six pictures combined together in a collage. And we noticed that picture 1, 3 & 4 and picture 2, 5 & 6 are of two different events. 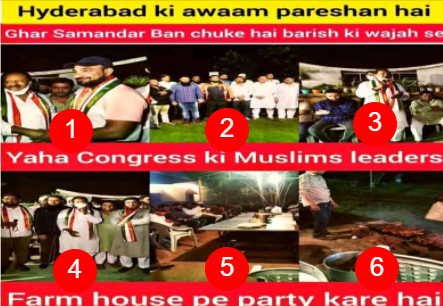 With the help of Google Reverse Image Search and relevant keyword searches, we found that out of six pictures, picture 1, 3 & 4 were of an event that was reported by local media organisations on Facebook to be of October 6, 2020. According to the report, more than two hundred youth from Karwan Assembly joined Congress party in Hyderabad.

Also, we found another video of the same event on YouTube by Star-News Express dated October 6, 2020, claiming that several youth members joined the Congress party in Hyderabad.

Further, we then searched for pictures 2, 5 & 6 and found pictures on the Facebook profile of Sameer Waliullah who is the Chairman of the Hyderabad Congress Minority Department. As per the post, the pictures are of a dinner at his farmhouse on September 13, 2020. 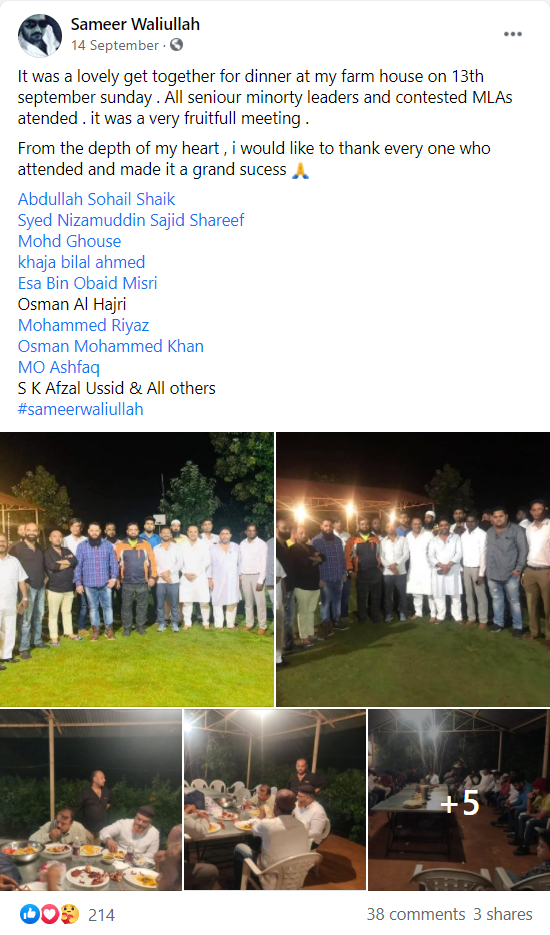 On comparing viral picture 2, 5 & 6 and original pictures we can clearly see that the pictures are of the same dinner gathering in a farmhouse on September 13, 2020.

In conclusion, the pictures are of two different events which are falsely linked with the Hyderabad floods. Don’t fall for false and misleading claims.