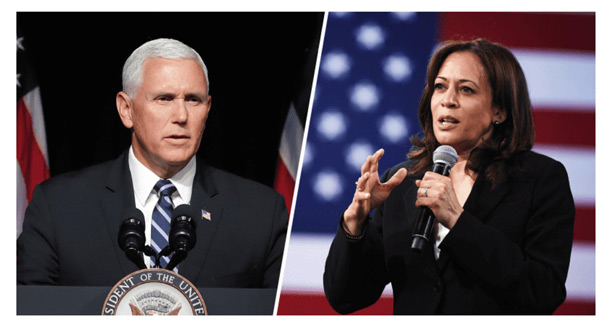 ShareTweetGoogleWhatsappPrint
Mail
The US Vice Presidential Debate turned into a no holds barred bout between Kamala Harris and Mike Pence on Wednesday as Harris put key decisions of the Trump administration under the scanner including US’ policy on China.
Kamala Harris incidentally became the third woman to ever take part in a Vice Presidential debate. Speaking passionately about what she believed could make America better, she spelt out why Americans people should vote for change after four years of Trump administration.

Harris also slammed Trump administration over its handling of the coronavirus pandemic and went on say that she would not take any vaccine endorsed by the President.

Over 210,000 Americans have died. Over 7 million have contracted this disease. Nearly 30 million have filed for unemployment. One in five businesses are at risk of closing.

And this administration still doesn’t have a plan. pic.twitter.com/iqcpXHAIya

During the debate, the Vice President said President Trump had “suspended all travel from China” in response to the COVID-19 pandemic. He further said that Joe Biden, in the contrary, had opposed Trump’s decision by calling it as “xenophobic”. “Biden opposed that decision. He said it was xenophobic,” Pence said.

Donald Trump has betrayed our friends and embraced dictators around the world. pic.twitter.com/ZHw9VeSTaL

Speaking on the trade war between the US and China, Harris attacked Pence and said that the “so-called trade war” resulted in the loss of 300,000 manufacturing jobs
“The Vice President earlier said it’s what he thinks as an accomplishment that the President’s trade war with China,” she said.

“You lost that trade war. You lost it. What ended up happening is because of a so-called trade war with China, America lost 300,000 manufacturing jobs.” Meanwhile, the Vice President slammed Joe Biden for being a “cheerleader for communist China”.

“Joe Biden has been a cheerleader for communist China over the last several decades. And Senator Harris, you’re entitled to your opinion, not your own facts,” Pence said.

Among the other topics debated between the two Vice-Presidential candidates, another issue that brought a series of attacks and counterattacks was — Trump’s earlier statement on climate change.

Earlier, President Trump had cast doubt on the observations of scientists about climate change and predicted that it would soon get “cooler”.

While denying that climate crisis poses an existential threat, Pence said, “There are no more hurricanes today than there were 100 years ago, but many climate alarmists use hurricanes and fires to try and sell the Green New Deal.”

Though both Harris and Biden do not support the progressive Green New Deal, she said, “Let’s talk about who is prepared to lead our country over the course of the next four years on what is an existential threat to us as human beings. Joe is about saying, ‘We’re going to invest in renewable energy, it’s going to be about the creation of millions of jobs, we will achieve zero emissions by 2050, carbon neutral by 2035. Joe has a plan.”

Biden would rejoin the Paris climate accord, which Trump left, the Democratic nominee added.

US President Donald Trump meanwhile put out a tweet at the end of the debate to suggest Vice President Mike Pence ‘won big’ at the debate.

ALSO READ: NewsMobile Explainer: All you need to know about US Presidential Polls