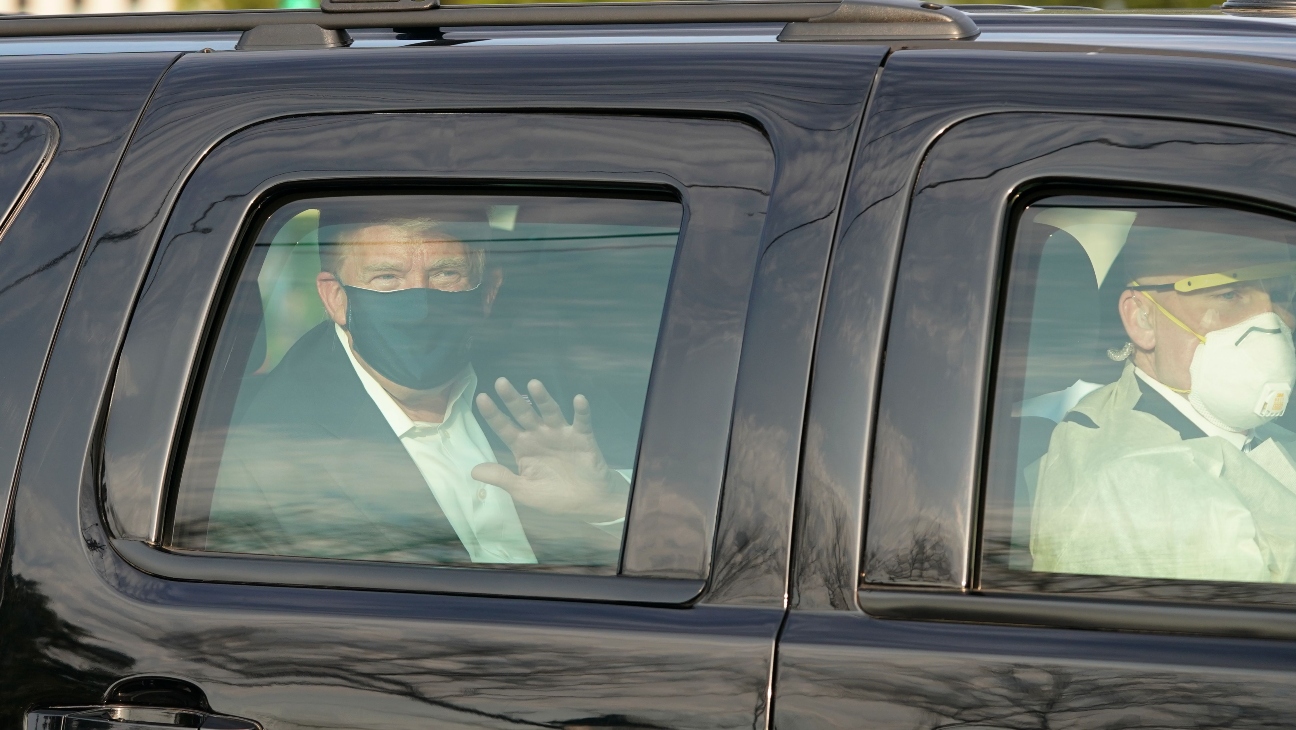 US President Donald Trump’s decision to step out of the hospital where he is being treated for the dreaded coronavirus has come under severe criticism from experts who feel he has – while trying to project strength – may have unnecessarily put both hospital staff members and Secret Service agents tasked for his security at risk.

Hospitalised for COVID-19 treatment last Friday, Trump received supplemental oxygen on Saturday and is being treated with a powerful steroids amid indications that his lungs may have suffered some damage on account of the virus attack.

In the video, which was posted before stepped out of the hospital, also said he had planned a little “surprise” for the “patriots” waiting outside without giving out details.

He made an unannounced exit from Walter Reed National Military Medical Center early Sunday evening climbing into his armored vehicle to ride past supporters holding Trump flags outside the building.

BREAKING: Moments after stating “I learned a lot about COVID”, the President takes a joyride in an enclosed space with presumably #COVID19 negative people, all while on experimental medications.pic.twitter.com/q3uc3YYLrg

Wearing a suit jacket and face mask, Trump waved at the crowd through a closed window as his motorcade slowly moved past before returning him to the hospital.

Medical experts are however seeing red and say this “reckless” behaviour has put lives of scores of others at risk.

That Presidential SUV is not only bulletproof, but hermetically sealed against chemical attack. The risk of COVID19 transmission inside is as high as it gets outside of medical procedures. The irresponsibility is astounding. My thoughts are with the Secret Service forced to play.

“Every single person in the vehicle during that completely unnecessary Presidential ‘drive-by’ just now has to be quarantined for 14 days,” Dr James P Phillips, an attending physician at Walter Reed tweeted. “They might get sick. They may die. For political theater. Commanded by Trump to put their lives at risk for theater. This is insanity.”

Every single person in the vehicle during that completely unnecessary Presidential “drive-by” just now has to be quarantined for 14 days. They might get sick. They may die. For political theater. Commanded by Trump to put their lives at risk for theater. This is insanity.

White House spokesperson Judd Deere however said President Trump’s trip outside the hospital “was cleared by the medical team as safe to do.” He added that precautions were taken, including using personal protective equipment, to protect Trump as well as White House officials and Secret Service agents.