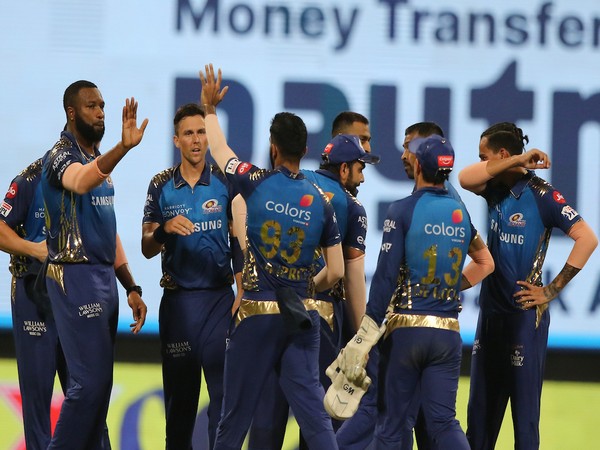 Chasing a massive target of 196 runs, KKR got off to a poor start as both the openers Shubman Gill and Sunil Narine were dismissed within the first five overs. Trent Boult got hold of Gill (7) while Narine was caught behind off James Pattinson’s delivery.

Nitish Rana and Dinesh Karthik then took the field and played cautiously and took the team over the 50-run mark. They formed a 46-run partnership before Karthik (30) was given LBW in the 11th over, bowled by Rahul Chahar. In the next over, Kieron Pollard dismissed Rana (24), putting KKR under immense pressure.

Eoin Morgan and Andre Russell then took the responsibility of the chase but Jasprit Bumrah was brought back into the attack and the pacer restricted batsmen from hitting big shots. KKR were playing at 82/4 after the completion of the 13th over.

The fall of the wickets did not stop as Bumrah removed both Russell and Morgan in the 16th over. In the Bumrah’s next over, Pat Cummins came out furiously and struck four sixes to the pacer.

Although Bumrah conceded 27 runs in the over, it did not make much of a difference. Pattinson then dismissed Cummins (33) in the 19th over.

Chahar bowled the last over and Mumbai Indians easily registered a win in the match. Bumrah, Boult, Chahar, and Pattinson all picked up two wickets each in the match.

Earlier, put in to bat, Mumbai Indians had a worst possible start with opener Quinton de Kock back in the hut in the very second over.

Suryakumar then joined skipper Rohit and bludgeoned the KKR bowling attack. Suryakumar smashed six fours and one six in his 47 runs knock off 28 balls.

In the 11th over, Rohit and Suryakumar tried to steal a double but the 30-year-old batsman had to make his way back to the dugout after a mixup in the middle. The run-out came against the run of play.

Meanwhile, Rohit continued his brilliant batting and scored boundaries at regular intervals. Saurabh Tiwary and Rohit stitched a 49 run stand before Sunil Narine dismissed the left-handed batsman in the 16th over.

Two overs later, Shivam Mavi ended Rohit’s blistering innings. He whacked six maximum in his knock of 80 runs and also registred his 200th six in the IPL. He is the second Indian to do so. CSK skipper MS Dhoni has 214 IPL sixes under his belt.

In the death overs, Hardik Pandya failed to leave a mark and got out hit-wicket. Kieron Pollard too didn’t connect how he used to and Mumbai weren’t able to get past 200 run-mark.

For KKR, Mavi took two while Narine and Andre Russell scalped one wicket each.