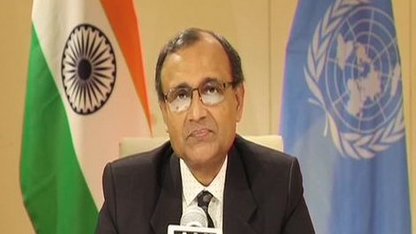 After Turkish President Recep Tayyip Erdogan on Tuesday said at the United Nations General Assembly (UNGA) that “Kashmir conflict is still a burning issue,” the Permanent Mission of India (PMI) to the UN has responded sharply.

“We have seen the remarks by the President of Republic of Turkey on the Indian Union Territory of Jammu and Kashmir. They constitute a gross interference in India’s internal affairs and are completely unacceptable,” PMI said in their Written Right to reply. “Turkey should learn to respect the sovereignty of other nations and reflect on its own policies more deeply,” it added.

On day two of the high-level UNGA, the Turkish President said, “The Kashmir conflict, which is also key to the stability and peace of South Asia, is still a burning issue.”

At last year’s high-level meeting of the General Assembly, only Erdogan and Mahatir Mohammed, the then-Prime Minister of Malaysia, joined Pakistan Prime Minister Imran Khan to talk about Kashmir.

Last year, weeks after India scrapped Article 370 of the erstwhile state of Jammu and Kashmir, Erdogan had raised the issue of Kashmir at the UNGA 74th session and criticised the international community for failing to pay attention to the Kashmir conflict.

This year after Pakistan’s Foreign Minister Shah Mahmood Qureshi raised the Kashmir issue, Erdogan too criticised the situation in Kashmir.

In a pre-recorded statement, the leader said that it is imperative to solve the issue of Kashmir through dialogue.

“We are in favour of solving this issue through dialogue within the framework of the United Nations resolutions, especially in line with the expectations of the people of Kashmir,” Erdogan added.

In the last one year, Pakistan-ally Turkey has used several platforms to raise the issue of Jammu and Kashmir. However, India, time and again, has told the west-Asian country that Kashmir is an internal matter of India.

Last week, India had slammed Pakistan, Turkey and Organisation of Islamic Cooperation (OIC) at the 46th session of the Human Rights Council for their remarks on India’s internal affairs.

First secretary, Permanent Mission of India in Geneva Pawan Badhe who delivered India’s right to reply said: “We reject the reference made by the OIC to the Union Territory of Jammu and Kashmir which is an integral part of India. The OIC has no locus standi to comment on internal affairs of India. The OIC has allowed itself to be misused by Pakistan to subverse its own Agenda. It is for the members of the OIC to decide if it is in their interests to allow Pakistan to do so.”