Prime Minister Narendra Modi on Thursday, at the launch of the e-Gopala app for livestock owners in Bihar, said that the app will give farmers the freedom from middlemen and provide all information related to productivity, health and diet for the cattle.

“Along with the good breed of animals, the correct scientific information about their care is equally important. For this, technology has been continuously used for the past years. In this direction, the ‘e-Gopala’ app has been started today,” he said. “The e-Gopala app will be a digital medium that helps livestock owners. It will be easy to choose advanced livestock. They will get freedom from middlemen. This app will give all information related to productivity, health and diet for the cattle,” he added.

The Prime Minister further said that so far about six thousand crore rupees have been deposited in the bank accounts of farmers of Bihar.

“The PM Kisan Samman Nidhi has also directly transferred money to the bank accounts of more than 10 crore farmers of the country. There are about 75 lakh farmers in Bihar. So far, about 6 thousand crores have been deposited in the bank account of farmers of Bihar,” he said.

“It is being emphasised that the benefits of free ration scheme and Pradhan Mantri Garib Kalyan Rojgar Abhiyan reach every needy partner of Bihar, reach every labourer family who has returned to the village from outside,” he added.

The Prime Minister said that India is now moving towards a situation where the establishment of industries related to food processing near the villages is taking place.
“Now India is moving towards the situation when such clusters will be formed near the village where industries related to food processing will also be established and there will also be research centres connected to it. That is, in a way we can say – Jai Kisan, Jai Vigyan and Jai Anusandhan,” he said.

The Prime Minister said that there is a need to be ‘vocal about local’ for Bihar’s renowned products as it will make the State self-sufficient. “Bihar’s products – be it lychee, zardalu mango or amla, makhana, or Madhubani paintings, are renowned. We have to be more vocal about these local products. The more vocal we are for the local, the more Bihar will become self-sufficient,” he said. 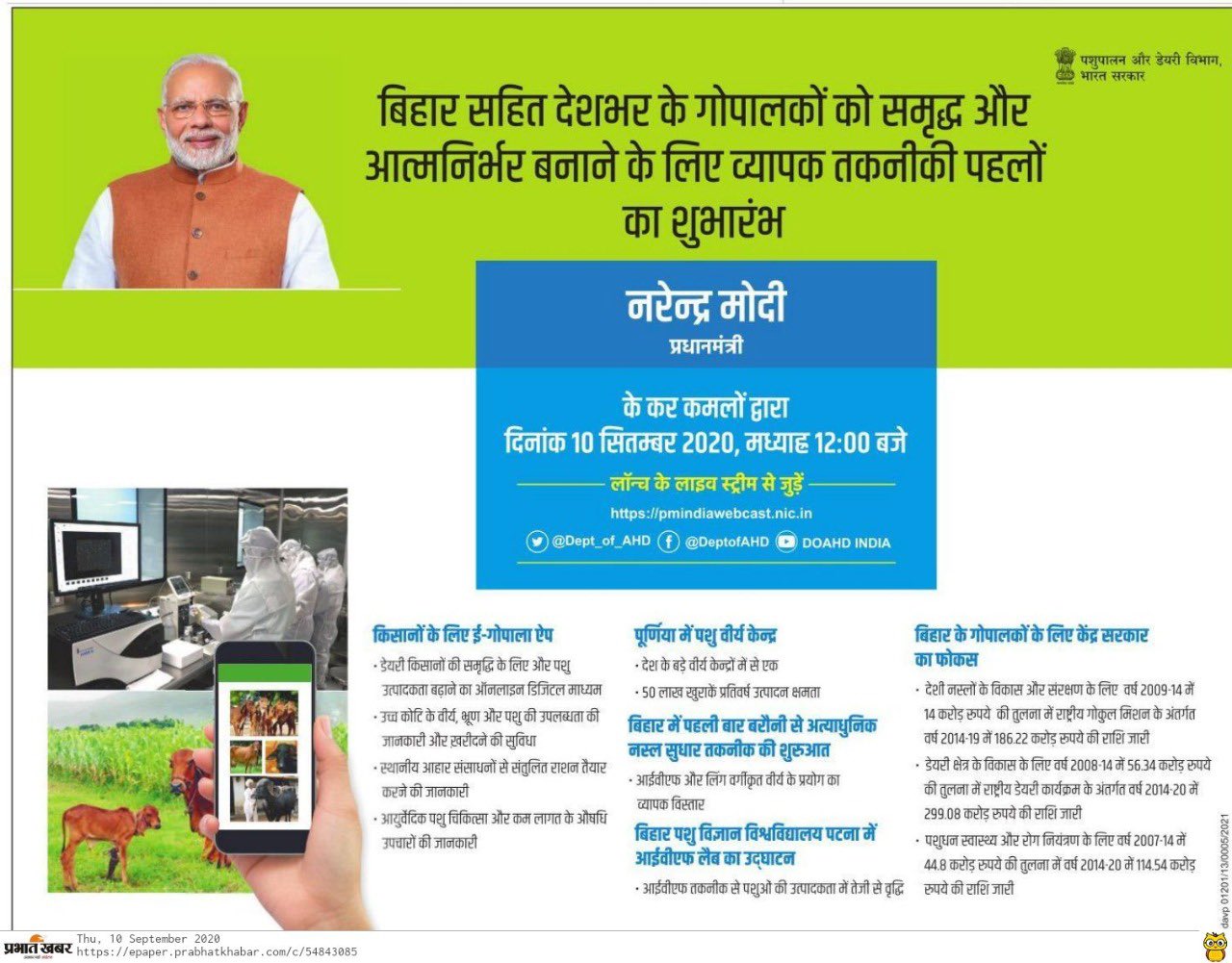 “Aranyak FPO associated with maize trade in Purnia district and Kaushiki Milk Producer Company of women dairy farmers in Kosi region, many such groups are doing commendable work. Now for the youth and women, the Central Government has also created a special fund,” he added.

Talking about the Pradhan Mantri Matsya Sampada Yojana (PMMSY), PM Modi said that works worth Rs 1700 crores are being started under this scheme in 21 states of India.
“Pradhan Mantri Matsya Sampada Yojana has been set with this goal in mind. Today the scheme is being launched in 21 states of the country. Over 20 thousand crore rupees will be spent on this in the next 4-5 years. Out of this, work worth Rs 1700 crores is being started today,” he added.

PM Modi further said that with the establishment of pisciculture facilities in various places in Bihar, fish producers will get new markets for their produce.

“In Patna, Purnia, Sitamarhi, Madhepura, Kishanganj and Samastipur many facilities have been inaugurated and the foundation stone laid. With this, fish producers will get new infrastructure, modern equipment, new markets will also be available,” he said.