Several posts have been doing rounds on social media claiming that IAF pilot Gunjan Saxena who fought for India in the Kargil War received the Shaurya Chakra award for her bravery. Shaurya Chakra is the third highest peacetime gallantry award in the nation. 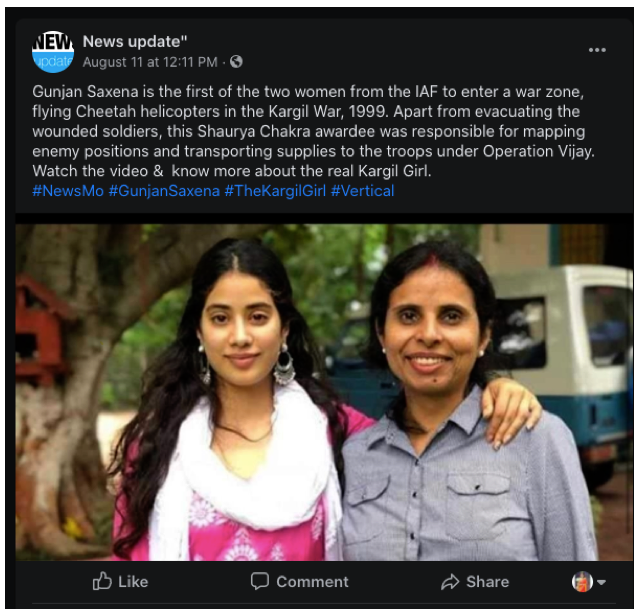 The claim read: “Gunjan Saxena is the first of the two women from the IAF to enter a war zone, flying Cheetah helicopters in the Kargil War, 1999. Apart from evacuating the wounded soldiers, this Shaurya Chakra awardee was responsible for mapping enemy positions and transporting supplies to the troops under Operation Vijay. Watch the video & know more about the real Kargil Girl.”

NewsMobile fact checked the above claims and found out that Gunjan Saxena did not receive Shaurya Chakra.

We Googled ‘Gunjan Saxena, Shaurya Chakra’ and came across an article by The Hindu from August 2020, which features an interview with Saxena. Towards the end of the interview, the Hindu ran a correction saying that Saxena is not a recipient of the award. 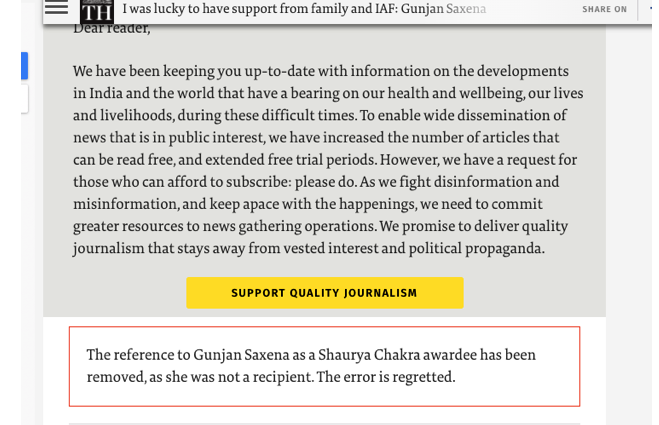 Upon further research, we found an NDTV article from August 2020, penned by Gunjan Saxena herself, clarifying some of the misinformation that spread after the release of the biopic.

She wrote: Neither I nor the filmmakers ever claimed I was a “Shaurya Chakra” awardee. After Kargil, I received the “Shaurya Veer” award from a civilian organisation in Uttar Pradesh. A certain section of the internet news possibly turned “Veer” into “Chakra”. This has been clarified many times during my media interactions for the movie’s promotions. Is it fair to blame me for this?

Hence, it is clear that Gunjan Saxena is a Shaurya Veer awardee but not a Shaurya Chakra awardee.