Futuristic entrepreneur Elon Musk unveiled his Neuralink startup’s experiment where a pig called Gertrude has a chip in her brain to demonstrate the working of brain-to-machine interface. The Neuralink in Gertrude “connects to neurons that are in her snout,” and showed a gathered crowd that when Gertrude sniffed and ate food, the computer received signals. 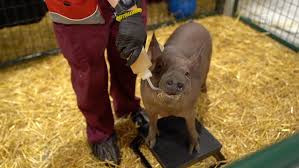 Musk described the Neuralink device as “a Fitbit in your skull, with tiny wires.” The threads connecting the device to her brain are flexible, Musk said, so when she head-butts other pigs it can jostle around and still work.

His start-up Neuralink applied to launch human trials last year. The interface could allow people with neurological conditions like parkinsons and dementia to control phones or computers with their mind.

The device the company is developing consists of a tiny probe containing more than 3,000 electrodes attached to flexible threads thinner than a human hair, which can monitor the activity of 1,000 brain neurons.