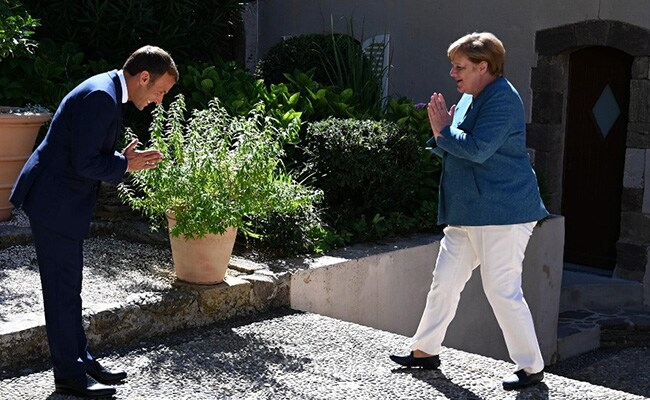 With COVID-19 showing little signs of abating worldwide, the Indian way of saying ‘Namaste’ and greeting each other with folded holds seems to have become the new normal in this pandemic era.

French President Emanuel Macron recently posted a video on Twitter where he is  seen greeting German Chancellor Angela Macron the Indian way. In the video, Macron can be seen leaning forward with folded his hands in the traditional Indian way of saying ‘Namaste’ while welcoming Merkel at his Mediterranean holiday retreat, the Fort of Bregancon, in southern France.

The German Chancellor reciprocated with what is becoming a popular form of greeting among world leaders in the time of the coronavirus pandemic.

The video has already gone viral with netizens saying Namaste is the new Hello.

Incidentally, US President Donald Trump and Israel Prime Minister Benjamin Netanyahu are among some of the world leaders who have adopted the Indian style of greeting.

Israel PM was one of the first world leaders to have adopted the Indian way of greeting.    “Just avoid shaking hands as I do. You can try to implement the Indian system of ‘Namaste’ or say another word like shalom, but find a way, any way of not shaking hands,” Netanyahu had said. 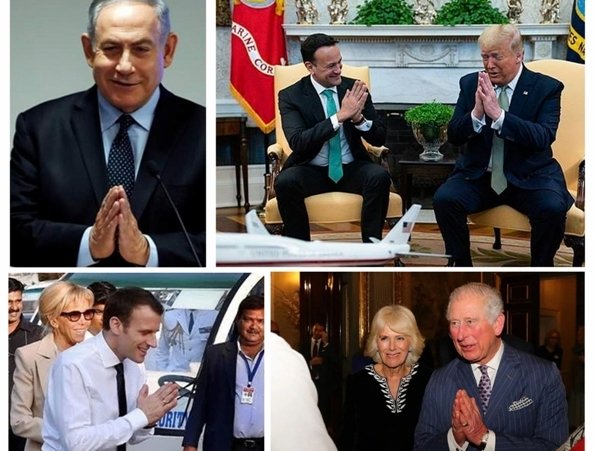 US President Donald Trump was also caught on camera greeting Irish Prime Minister Leo Varadkar with folded hands in Indian greeting style in March. “We did not shake hands today. We looked at each other and said what we are going to do. You know, sort of a weird feeling,” Trump had told the media after his meeting with Irish PM.

Prince Charles is having to switch to ‘Namaste’ as opposed to the usual ‘Hand Shake’ due to the #coronavirus … Surely it’s better!😉😊🙏pic.twitter.com/9UtCPNOUgd

Prince Charles too greeted people with ‘Namaste’ in London and the video had been shared worldwide.

While addressing the India Global Week 2020, Prime Minister Narendra Modi had said, “You would have seen Namaste has gone global as a form of greeting. The pandemic has also seen the universal appeal of yoga, Ayurveda and traditional medicine world over. India’s ancient culture and universal peaceful ethos are its strength.”

With hand hygiene emerging as one of the most potent tools to stop the spread of novel coronavirus, ‘Namaste’ for sure will be the new Hello world over soon.