The ED on Monday will be grilling Rhea Chakraborty’s Chartered Accountant Ritesh Shah. The ED’s line of question will revolve around Rhea’s income, investments, business and professional deals, and links.

The ED on Friday revealed that The Equated Monthly Installments (EMIs) of a flat where late actor Sushant Singh Rajput’s friend and actor Ankita Lokhande used to stay, was deducted from Rajput’s bank account. However, dismissing the claims Ankita Lokhande took to the social media to prove the allegations wrong. In the post she had shared pictures of the registry documents and bank transactions of the last year.

Here i cease all the speculations.As transparent as I could be.My Flat’s Registration as well as my Bank Statement’s(01/01/19 to 01/03/20)highlighting the emi’s being deducted from my account on monthly basis.There is nothing more I have to say🙏 #justiceforssr

On Friday, in a Global campaign for prayers for Sushant, many of his fans participated and posted about it on social media platforms.

Shiv Sena leader Sanjay Raut denies threatening Sushant’s family. In a statement on Friday, he clarified that he has full sympathy for family. He said “We have full sympathy for Sushant Singh Rajput‘s family. Yesterday I just said that they should’ve some patience but it was shown that I’ve threatened them. Was that a threat? Trust Mumbai Police. If you think they’re not doing a good job, then go to CBI.”

He added, “Sushant Singh Rajput was our son. He lived in Mumbai, he was an actor. Bollywood is Mumbai’s family. What enmity will we have? Even we want his family to get justice. We want the secret behind his death to come out.”

According to media reports, Central Bureau of Investigation has recorded few more statements of people important in the investigation of the case, however the identities of these people still remain disclosed. Earlier, the CBI recorded the statements of the actor’s family members.

Sushant’s sister has launched a global prayer campaign for Sushant. In a social media post she has urged people to join  in a global 24 hour spiritual and prayer session at 10 am on August 15.

I request you all to please join us for Global 24-hour spiritual and prayer observation for Sushant Singh Rajput, so that the truth prevails and we find justice for our beloved Sushant #GlobalPrayers4SSR 🙏❤️🙏 #CBIForSSR #Warriors4SSR #justiceforSushantSinghRajput #Godiswithus pic.twitter.com/glXWJLf3zl

Kriti Sanon had also joined the group demanding a CBI probe in Sushant Singh Rajput’s death case and shared a post on her Instagram, saying that the  Sushant’s loved ones need to know the truth. Sushant and Kriti worked together in 2017 film Raabta. 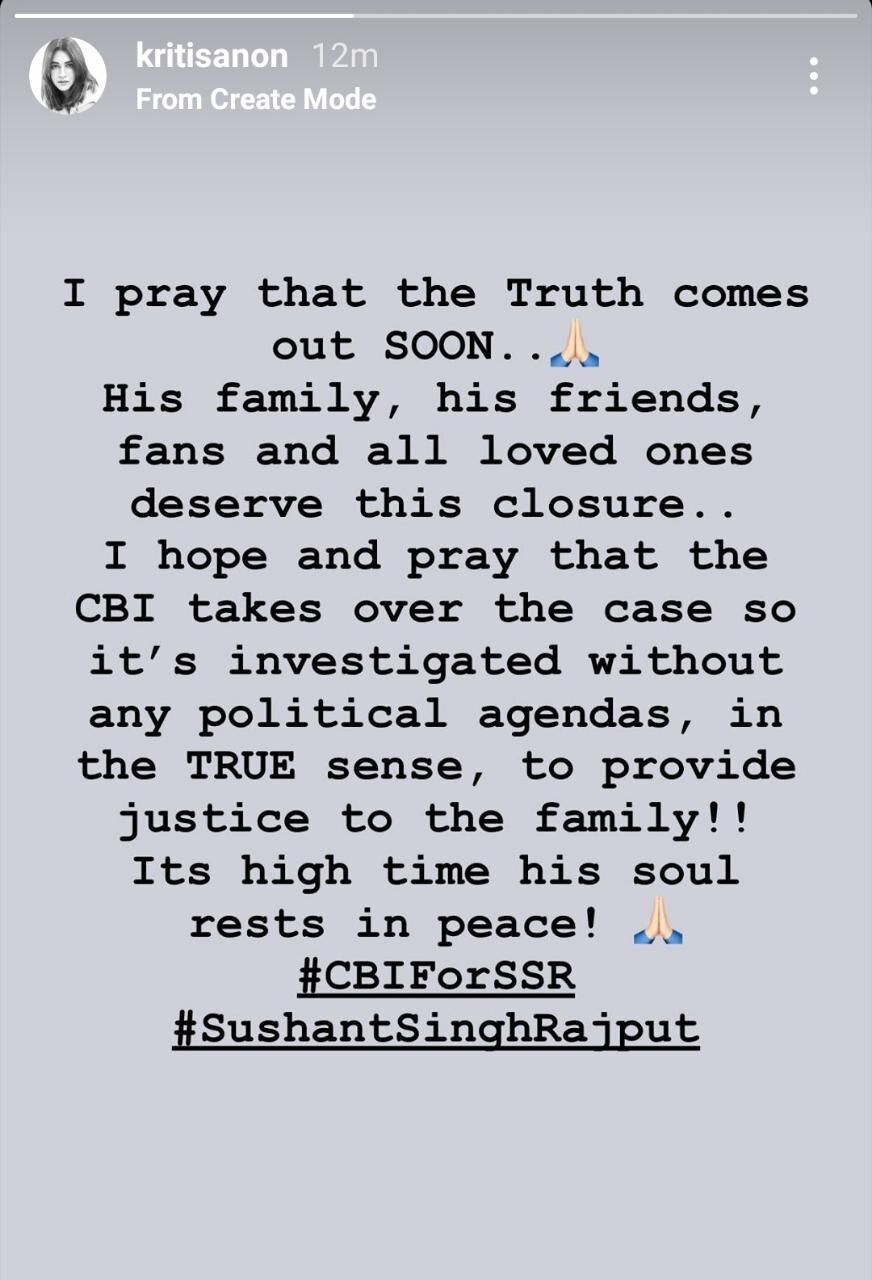 Ankita Lokhande and Kangana Ranaut posted videos on their twitter handles demanding CBI probe in the Sushant Singh Rajput death case. They are pressing for the CBI probe demand, saying they deserve to know the truth. This came after Shiv Sena leader Sanjay raut said that Mumbai Police is close enough to wrap up their probe.

Mumbai police wants to rush the probe, Sanjay Raut saying they are almost done with the investigation, we deserve to know the truth #CBIForSSR @republic #justiceforSushanthSinghRajput @shwetasinghkirt @anky1912 pic.twitter.com/2SV1AwaFx7

Shiv Sena leader Sanjay Raut has said that all political parties, opposition and family members should stay quiet until the police complete their investigation.
He also added that the Mumbai Police is close enough to wrap up their probe.

Advocate Vikas Singh, a lawyer of Sushant Singh Rajput’s father said in a statement that “Since Supreme Court has listened to  lengthy arguments in the matter,I want that it should comment that the case has rightly gone to CBI. The Court should give directions that Mumbai Police should help CBI in the investigation.

He also commented on Mumbai Police and said “I have always said that the Mumbai Police is a very professional Force. But for some reason, in this case, Mumbai Police have completely gone in a wrong direction. So the family had to approach Patna Police.”

According to Vikas Singh, if Rhea had not closed the line of communication between late actor Sushant Singh Rajput and his family, then his demise could have been evaded. He also added that ultimately family is the ‘biggest support system’.

Supreme Court adjourns the hearing of a PIL filed by advocate Ajay Agrawal for a CBI probe into Sushant Singh Rajput Death Case to August 21, Friday.The PIL stated that “the entire country is shocked by the way the Mumbai Police is handling this case”.

Earlier, the Bihar Police said to the apex court that  SP Vinay Tiwari was virtually ‘detained’ in name of quarantine in Mumbai.

Sushant Singh Rajput’s sister Shweta Singh Kirti on Thursday demanded an unbiased investigation into her brother’s death case and said that she expects nothing but the truth to come out.

“We stand together as a nation for CBI Enquiry! Demanding an unbiased investigation is our right and we expect nothing but the truth to come out,” Shweta tweeted and attached a video. In the video, she can be seen holding a placard that reads #CBIForSSR “I request everyone to stand together and demand CBI enquiry for Sushant.

‪We stand together as a nation for CBI Enquiry! Demanding an unbiased investigation is our right and we expect nothing but the truth to come out. 🙏 #CBIForSSR #Warriors4SSR #justiceforSushanthSinghRajput @PMOIndia @narendramodi @AmitShah ‬

We deserve to know the truth. We deserve justice for Sushant, otherwise, we will never find closure, you won’t be able to live a peaceful life,” she said in the video.

Sushant Singh Rajput’s family had recently shared a letter consisting of 9 pages which is emotional. SSR’s father and sisters have penned about their journey from the beginning until now. The family has talked about the threats they have been receiving and has also alleged that the Dil Bechara actor has been murdered.

This comes after the recent comments made by Shiv Sena MP Sanjay Raut, Sushant’s family is upset about it and is considering taking legal action. Raut, who is the associate editor of party’s editorial mouthpiece Saamana, said in an article that the Bollywood actor was not on good terms with his father KK Singh.

Earlier, Film producer Ramesh Taurani explained his phone call with Sushant Singh Rajput a day before his death. In an Instagram post, he clarified the ‘facts of the phone call’ on Tuesday. He wrote that he had a 15-minute professional discussion with Sushant on June,13. He said that one cannot deduce a person’s feeling on a professional call, “ I am not aware as to how you can deduce anything about a person’s feeling over a professional phone call. Our call was brief for approximately 15 minutes and he liked the idea and we were in preliminary talks. That’s about it.”

I have been getting numerous calls from various journalists over the past few days and want to set the record straight about a few facts. 1. A journalist from @timesnow called me asking about a call on 13th June at about 2.15pm that I had with Sushant. I confirmed the same but did not want to comment on anything else. He recorded the call without informing me and therefore it is essential that I talk about what happened. After exchanging pleasantries, Nikhil Advani and I had narrated a story idea to Sushant. And yes we were on a conference call with him and his manager Uday. 2. This journalist also asked me how he sounded on the phone and I’m not aware as to how you can deduce anything about a persons feeling over a professional phone call. Our call was brief for approximately 15 minutes and he liked the idea and we were in preliminary talks. That’s about it. 3. Instead of encouraging wrongful theories about the industry and about his associations, I am requesting everyone to have faith in the system and let the authorities do the needful. And I request everyone to stop calling as we need to refrain from commenting any further on this unbelievable and tragic loss. I sincerely hope he’s resting in peace. Thank you.

As per several media reports, On Tuesday, Sooraj Pancholi has filed a complaint at the Versova Police Station alleging harassment over being linked to the controversial death of Sushant Singh Rajput and his manager Disha Salian. The complaint is against those who carry unverified news reports linking him to Disha Salian and Sushant Singh Rajput’s deaths without any evidence. Sooraj’s name was dragged into rumours,  claiming that Disha was pregnant with the actor’s baby.

Shruti Modi leaves ED office and in a statement to ED, she told that Rhea Chakraborty was taking decisions for Sushant Singh Rajput ever since she came into his life.

Shruti Modi, the former business manager of Sushant Singh Rajput, on Tuesday, appeared before the Enforcement Directorate (ED) in Mumbai for questioning in connection with a case related to the death of the actor.

Rajput’s friend Siddharth Pithani also appeared before the ED for questioning. On Monday, a team of ED had questioned actor Rhea Chakraborty, her brother Showik Chakraborty and her father Indrajit Chakraborty in connection with the case related to Rajput’s death. Shruti Modi was also quizzed by the agency on Monday.

Besides, Rhea Chakraborty on Monday approached the Supreme Court with a fresh plea alleging media trial and attempts to pronounce her guilty for the death of the actor.

CBI has registered a case against six accused, including Rhea, in connection with Rajput’s death who was found dead at his Mumbai residence on June 14.