A post has been going viral on social media claiming that Joe Biden’s running mate and US Vice Presidential candidate Kamala Harris said that revenge must be sought against Donald Trump supporters as they betrayed the nation.

The full text reads: “And once he’s gone and we have regained our rightful place in the White House, look out if you supported him and endorsed his actions, because we’ll be coming for you next. You will feel the vengeance of a nation. No stone will be left unturned as we seek you out in every corner of this great nation. For it is you who have betrayed us.” Kamala Harris, Democratic Candidate for Vice President 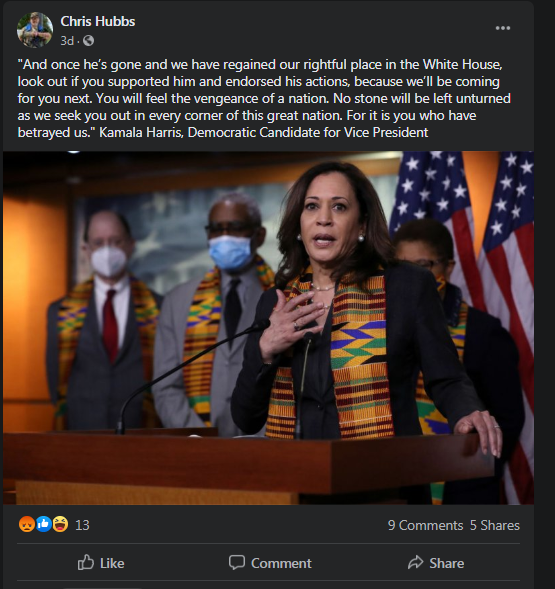 The posts can be seen here, here and here.

We fact checked the above claims and found them to be false.

We Googled the claimed quote as it is and came across its source – a website called bustatroll.org.

On reading this post, there was a very prominent red flag such as the informal language of the article, the images used etc.

We then saw at the top of the article that it lists it as Hot Potato, Satire and/or Conservative Fan Fiction.

Hence, it is clear that Kamala Harris has not made a statement to avenge all Trump supporters.