A picture of an aircraft with a plush interior is being shared on social media with a claim that this is the interior of Prime Minister Narendra Modi’s new official aircraft.

The posts claim that the image is of the Boeing-777 aircraft that was recently purchased for use of PM Modi.

Some of the posts are also being shared with a link to a Business Today story and a screenshot of a news article by Times Now Digital dated June 2020 is also being shared along with the post. The headline of the article reads: Flown by IAF pilots, fitted with missile shield: All about PM Modi’s B-777 VVIP aircraft Arriving in September.

NewsMobile fact-checked the posts and found them to be Fake.

Firstly, we examined both the articles mentioned in the posts. The Business Today article talks about two aircraft (Boeing 777-300ER) which the government earmarked from Air India’s 2006 order of 68 aircraft given to US-based aircraft maker Boeing.

The aircraft will be used to ferry VVIPs like President Ram Nath Kovind, Vice-President Venkaiah Naidu and Prime Minister Narendra Modi. The aircraft would replace the nearly 25-year-old Boeing 747 that is currently being used by Air India for flying the VIPs.

The Times Now article stated that the delivery of the aircraft was delayed due to COVID-19.

We then checked the picture in circulation and found the same picture in an article by Business Insider. As per the caption, it’s the interior of Boeing 787 Dreamliner. The article also states that it is currently available on Chinese aircraft operator Deer Jet’s 787 Dreamliner. 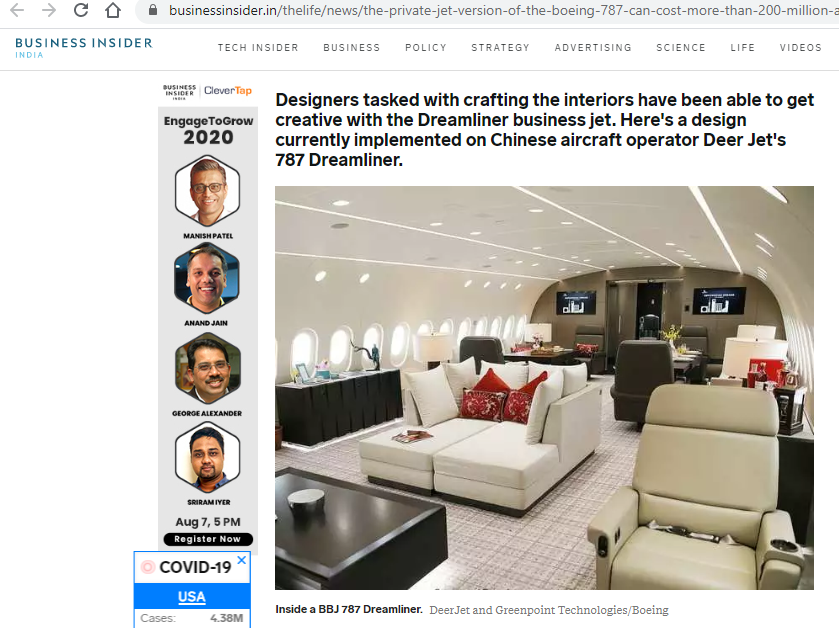 We found the same picture of the official website of Deer Jet, according to which, it took “French aircraft interior designer Jacques Plerrejean and the aircraft completion centre more than 2.5 years of work to create this masterpiece of aerospace and craftsmanship.”

The Press Bureau of Information also clarified that the post in question is false.

Claim – A twitter user has posted image of luxurious interior of an aircraft claiming it is PM @narendramodi‘s official aircraft #PIBFactCheck – The photo is of a private Dreamliner model by Boeing 787 and not of PM’s aircraft #FakeNews pic.twitter.com/eTyhpBTpor

Hence, from the above information, we can conclude that the posts in question are misleading and false.