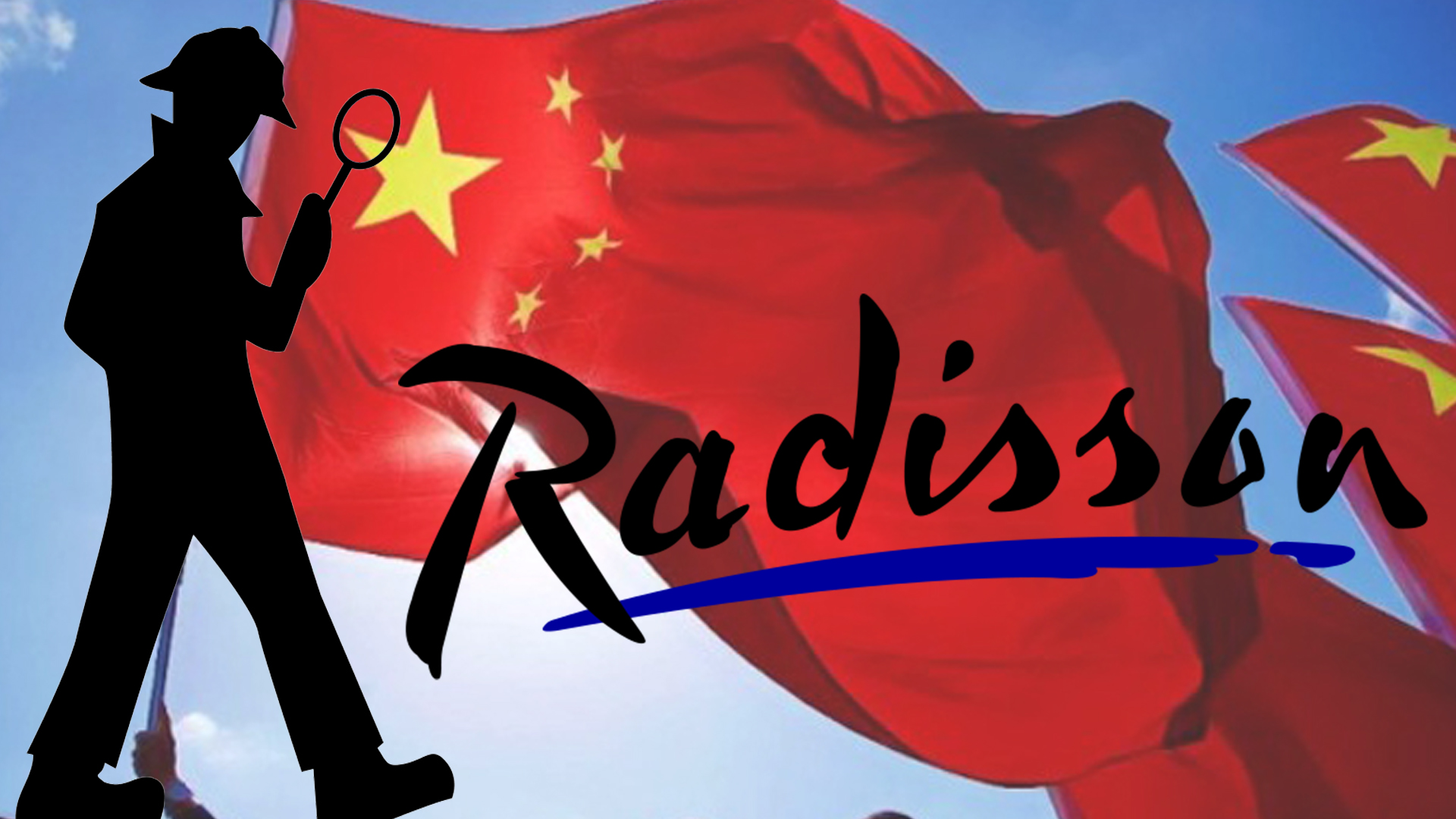 At a juncture when the Indian Government is dealing with the Chinese threat and action is being taken against the Chinese companies, security concerns have come to the fore on how a Chinese government-funded hotel chain has spread its tentacles across India raising big questions.

Does the name Radisson sound Chinese to you? Most people would think that Radisson is an American company with hotels across the world including India. While the hotel chain was founded in the US, In 2018 Jin Jiang International, a Chinese state-owned tourism and hospitality company bought 51% stake in Radisson, with a commitment of buying an additional 18.5% stake in the company. In 2017, Louvre Hotels Group acquired a majority stake in Sarovar Hotels.

Multiple reports say that the Louvre has acquired 75% stake in Sarovar. The Louvre Hotels Group, one of Europe’s best-known hospitality brand had been acquired by Jin Jiang International in 2015. So, essentially both Radisson and Sarovar are owned by a Chinese state-owned company. The Shanghai branch of the Chinese communist party owns a majority stake in the hotel chain through the Jin Jiang Group which is run by the Shanghai municipal government.

Radisson operates more than 94 hotels in India and Sarovar has about 75 hotels across the premium, mid-range and budget categories. Most companies have a management contract or a franchise with local hotel owners who pay a fee for using international brand names. International hotel chains bring in their specific service standards and many times operating software which is the same across different hotels run by the chain.

Jin Jiang has close ties to the Chinese communist party it is headed by Yu Minliang and Guo Lijuan, the vice-chairman of the board was the deputy head of the suburban department of China communist youth league in Shanghai. Globally Chinese companies have come under a scanner.

The question is when you check into these hotels, use their wifi, visit their restaurants and pay by your card, is this information stored locally or does the data find its way back to the Chinese company that owns these hotels? Could this data be misused? Also when Government agencies or corporate companies use these hotels could they be at a risk. 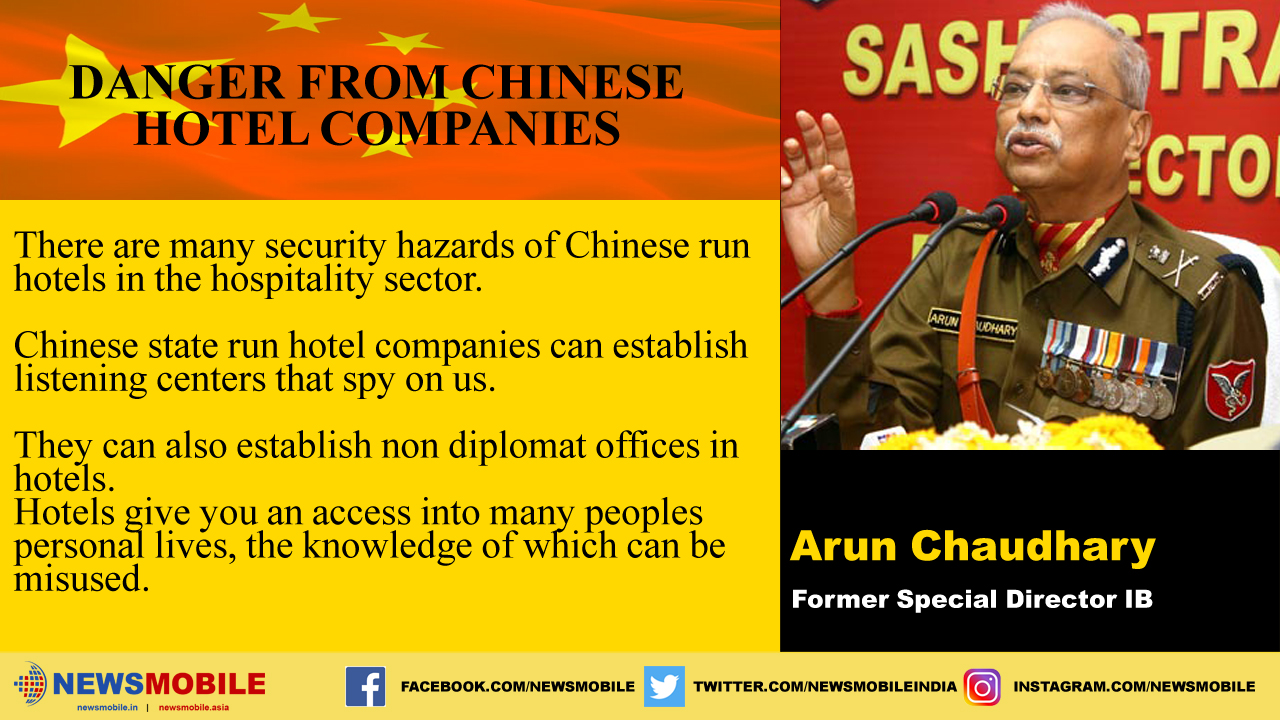 Experts have raised red flags, Former Special Director of Intelligence Bureau says there is reason to be concerned. “There are many security hazards of Chinese run hotels in the hospitality sector. Chinese state-run hotel companies can establish listening centres that spy on us. They can also establish non-diplomat offices in hotels. Hotels give you access into many peoples personal lives, the knowledge of which can be misused,” he told NewsMobile.

Former diplomat, Ambassador Anil Trigunayat, while not wanting to wave the red flag just yet, harped on the need of greater security and said we must have adequate firewalls. The location of the hotels, in many cases close to airports, and also in sensitive cities is also a factor that is raising eyebrows. “I wouldn’t consider it a security threat just yet but the location of the hotels can be looked into. The threat perception is high in areas like telecom for instance,” observed Yashovardhan Azad, former IB Special Director. 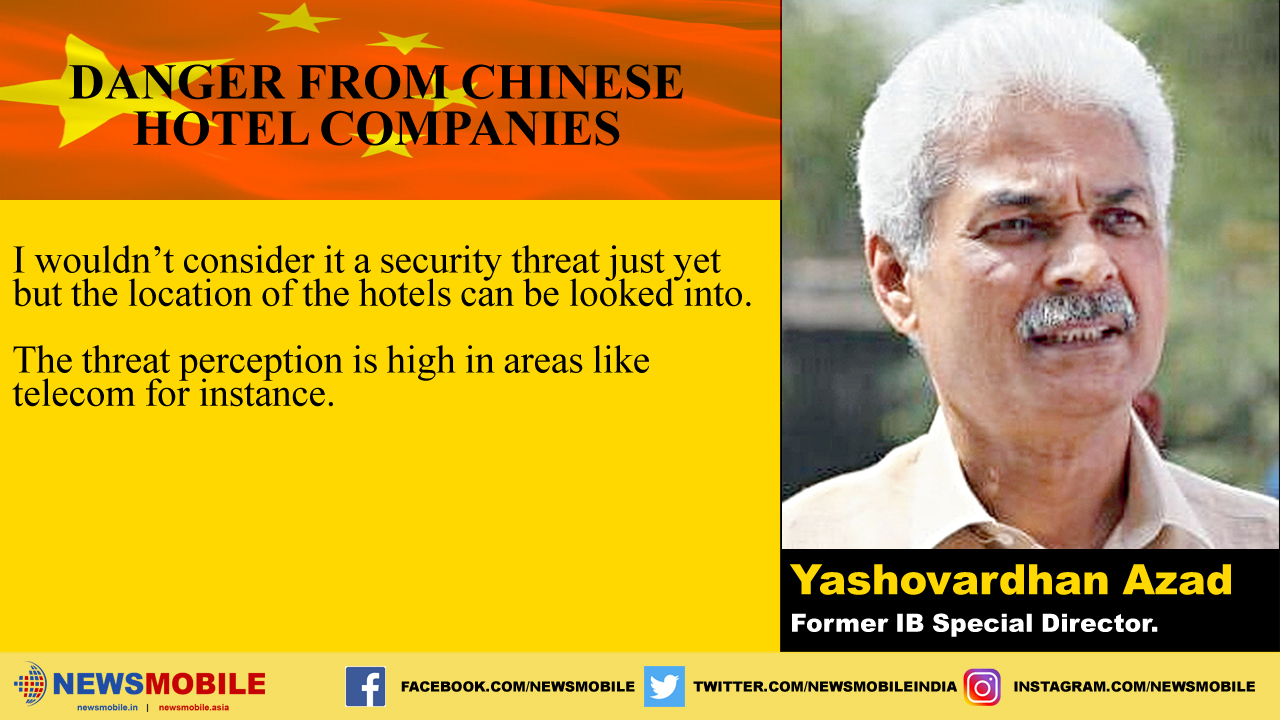 Strategic affairs expert Prabal Dasgupta, who has also authored a book on Indo-China war of 1967, sees a definite cybersecurity threat. “Alongside the identity theft through Aadhar card that’s deposited and credit card theft, use of WiFi to hack information and manipulate data is a threat. Espionage using private spaces in the hotel, not accessed by security agencies could be a threat as well. IPR threat cannot be ruled out. We must not forget that the Chinese use surprise hubs and hotels are private spaces where no one else interferes.” 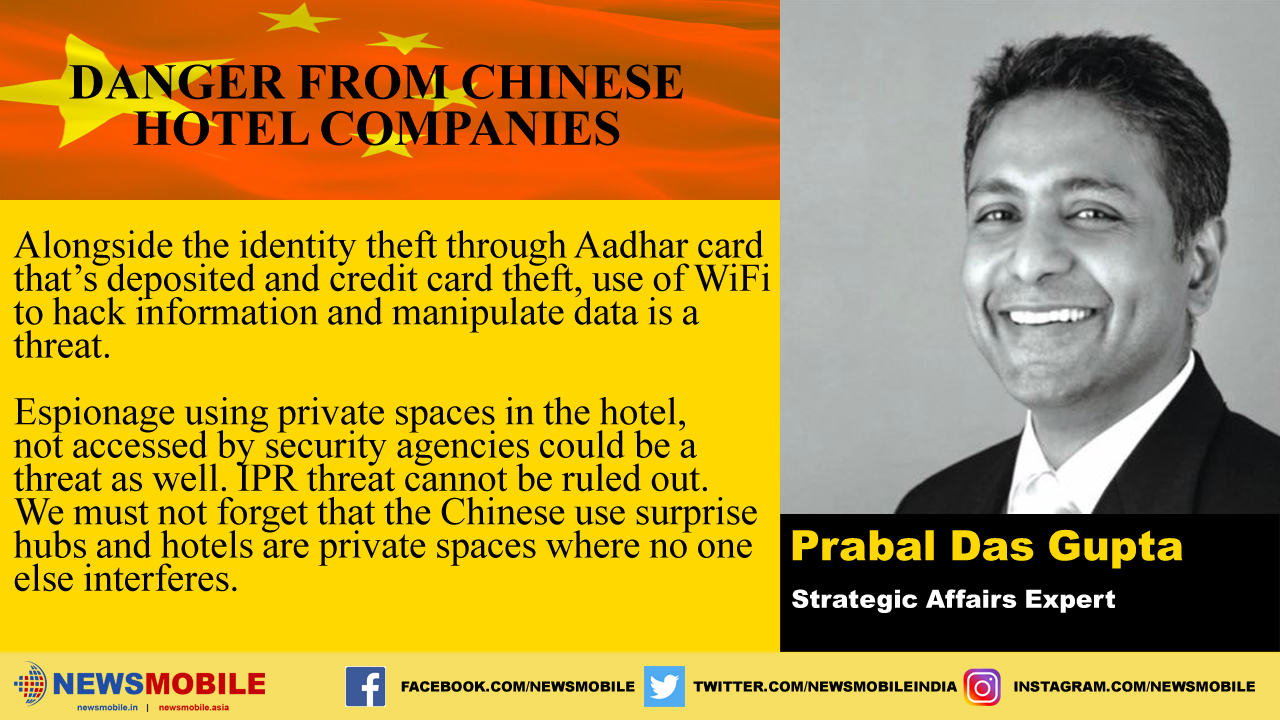 Incidentally, former US President Barack Obama decided not to stay at the customary Waldorf Astoria Hotel during United Nations General Assembly in 2015 since the hotel had been bought by Chinese investors with deep ties with the Communist deep state and threat of spying was high.

Intelligence sources say that hotels were fertile grounds for conducting Chinese influence operations and in the case where the hotel chain was owned by the Chinese state, the clear and present danger is there. The Government must ensure the security vetting of these hotels and also re-examine the Chinese investment in the hotel chain.

A close observer of China Affairs Dr Aravind Yelery who was also associated with the Institute of Chinese Studies in Delhi too feels it is an “area of concern”. “While on the face of it they want to exploit Chinese tourists coming to India, from a national point of view, it is indeed a concern. No PSU will invest in any overseas venture without government clearance, would they,” he asked.

Other senior China observers, who did not wish to be quoted, draw attention to the proximity of Radisson hotels to strategic locations including airports, especially in Delhi, which makes the espionage theory look real. “Government must ask them for a complete change of holding pattern. There can be no compromise with national security. Who all come and go into these hotels must be watched,” said a senior China observer.

NewsMobile reached out to the hotel company with a set of questions. That who provides software of the hotel chain, where was the data of guests stored, is the data shared with the parent company and what is the extent of Chinese investment in the Radisson group. This is what the hotel said, “Radisson Hotel Group is one of the world’s largest hotel groups with seven distinctive hotel brands, and more than 1,400 hotels in operation and under development in 120 countries. The company was founded in Minneapolis, United States of America more than 60 years ago and is currently headquartered out of Minneapolis, Brussels and Singapore. We independently manage (and franchise) hotels across India and are deeply committed to the system and data security through compliance regulations and rigorous enforcement,” was the response from Radisson Hotels.

Perhaps these are questions that as hotel guests we must all keep in mind, next time we go for a holiday or travel for business.