Several posts have been circulating online with the claims that answering a call from a number starting with ‘+140’ will empty the user’s bank account.

In other posts, people have shared videos of police personnel from Mumbai Police announcing that calls from ‘+140’ numbers shouldn’t be answered as your mobiles may get hacked. 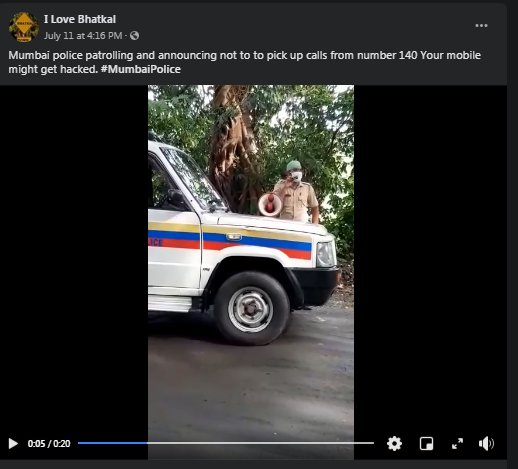 Since most of the posts were related to Mumbai Police, we checked the official Twitter accounts of Maharashtra police force and found a tweet on the handle of Maharashtra Cyber police dated July 12, 2020.

The tweet read: We would like to clarify that numbers starting with +140 are telemarketing calls. Please don’t believe any rumour.

The image shared in the tweet clarifies that such messages should not be believed and ‘+140’ calls are telemarketing calls. It further advises users to not share any OTP or bank details with any telemarketers.

Further, when we Googled the keywords ‘140 number scam calls’, we came across multiple reports about calls from the channel SonyLiv as part of a publicity gimmick. 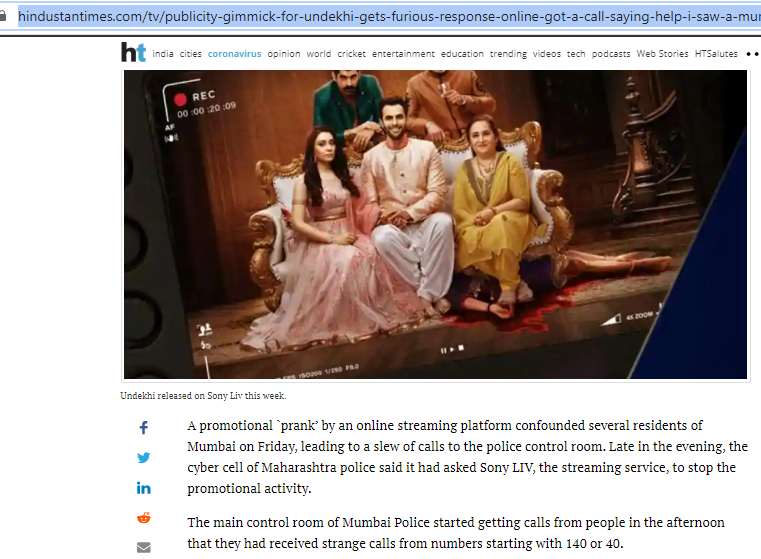 As per a Hindustan Times article from July 11, 2020, as part of show promotion, many people got a call from a 140 or 40 number. The call was a pre-recorded message of a person who identified himself as `Rishi’. In the recorded voice message, he is supposedly begging for help and stating that he has witnessed a murder and recorded the incident on a mobile phone. The killer was now trying to kill him, the message said.

Following this activity, the Maharashtra police had issued its warning:

It has come to our attention that a Sony Liv, a tv channel has used a tactic for the promotion of its new show by calling people and playing a disturbing voice recording. If you receive any such call, please do not panic and create rumours. (1/n)

The account further clarified the misinformation around the video of the police personnel.

In any case, and in ALL cases, People should NOT share their confidential banking or personal details or OTP with such callers. (2/n)

Hence, the claims that attending a call from a  +140 number can lead to emptying of your bank account are misleading.