Home NM FACT CHECKER Fact Check: Image of a road full of potholes is not from...
ShareTweetGoogleWhatsappPrint
Mail

A picture of a road full of potholes is being shared on social media with a claim that it is from Rahul Gandhi’s Lok Sabha constituency Wayanad. 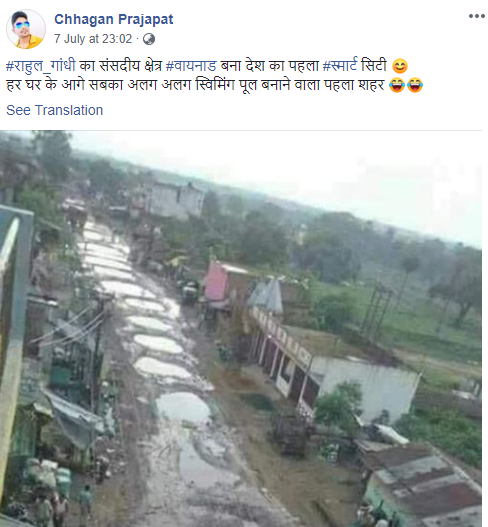 The posts were shared extensively on Facebook. You can check the posts here, here and here.

On putting the image through Reverse Image Search, we found a tweet dated 2016, featuring the same image. The tweet claimed that the picture was from Bhagalpur-Pirpainty-Mirzachowki National Highway (NH-80).

We then ran a search and found a TOI report, dated 2017, featuring the same image and the report stated that the picture was from Bihar.

The same pictures were also tweeted by then Bihar Deputy CM, Tejashwi Yadav, after a user tagged him to show the pathetic condition of the state’s roads. His tweet compared the two pictures of the same location before and after the road was repaired.

In a report by ABP news, posted in 2017, it is verified that the picture is from Bihar and the road was indeed repaired.

From the above information, we can establish that the picture in question is an old image from Bihar. Hence, the claim is false.