A screenshot of a tweet is doing rounds on social media which is attributed to industrialist Mukesh Ambani. According to the tweet, Ambani stated that keeping the public sentiments in mind, the company has removed Bollywood actor Shahrukh Khan from the commercial of ‘Jio’ sim card, and has replaced him with Akshay Kumar. 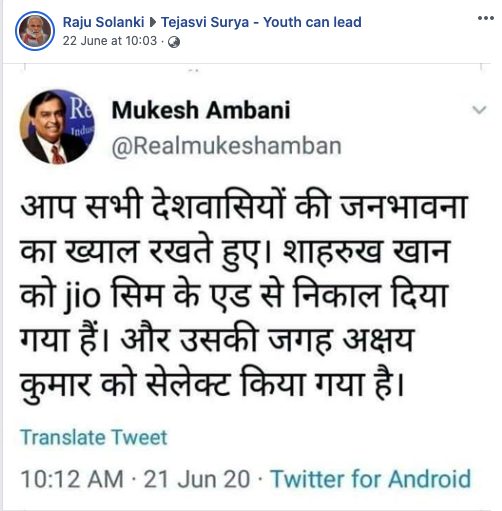 NewsMobile fact-checked the above screenshot and found it to be FAKE.

The first red flag is the Twitter handle from which the Tweet was made (@Realmukeshamban) is not verified.

The geo location of the account is set to New Delhi while Mukesh Ambani is based in Mumbai. 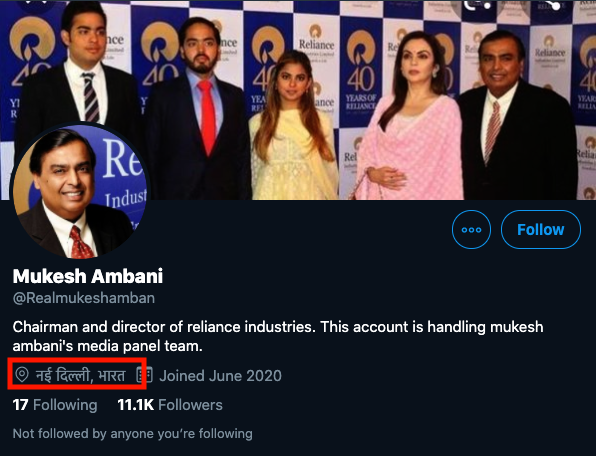 The bio of the account read: “Chairman and director of reliance industries. This account is handling mukesh ambani’s media panel team.”

However, Mukesh Ambani does not have a Twitter handle and he is not on any social media platform. Moreover, the claim of Reliance replacing Shah Rukh Khan with Akshay Kumar is also untrue as there are no official communication by the company.

In conclusion, the tweet in question was posted by an unverified twitter handle and is being falsely attributed to Mukesh Ambani.