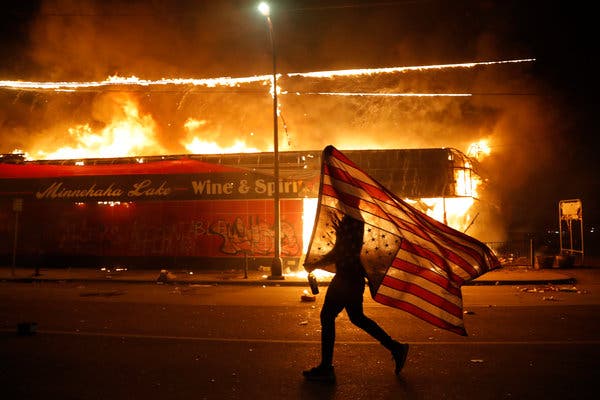 The civil unrest which began in the US has now culminated into protests across many European cities.

Large parts of the US remain under curfew.

NewsMobile explores this issue in detail.

On May 25, 2020, George Floyd, a non-white person was brutally assaulted by a white police officer named Derek Chauvin, while arresting him for a suspected case of robbery. The officer slammed his knee against the accused’s neck and held him down for more than 7-8 minutes.

He shortly passed away. The incident happened in Minneapolis.

Soon after, protests started taking place across the city, with large scale rioting and looting. The protests that began in Minneapolis have now spread to more than 25 cities in the US including Los Angeles, New York and Washington DC.

What is the issue?

The immediate provocation may have been the brutal killing of George Floyd which could point towards racial discrimination which could exist in the Police force.

However, what one can see is the pent-up anger and frustration that is seeing an outlet through these violent protests. People have attacked policy vehicles and even private establishments.

What is the status of these persons of Afro-American heritage?

Since the 1960’s their status has considerably improved as far as educational outcomes and wages are concerned. However, they still lag behind in terms of equal opportunities and property ownership.

A study by the Economic Policy Institute says that they still earn only 82.5 cents for every dollar earned by a white skinned person.

They are likely to be in poverty 2.5 times higher than a white skinned person.

A median white family has almost 10 times as much wealth as an Afro-American person.

It is these facts and a prejudiced society that believes that these individuals are mostly into criminal activities and live in ghettos that could have led to large scale discrimination.

Riots of the past

In 1969, large scale rioting and looting took place after the assassination of Martin Luther King. The government immediately appointed the Kerner Commission which recommended a slew of reforms.

The government then enacted the Civil Rights Act of 1968 which gave every US citizen certain inalienable rights.

The situation improved considerably after that.

However, weak gun laws have led to many incidents of shooting in which many Afro-Americans, Indians and other racial communities have been victims.

How has the US government reacted to this?

President Donald Trump has reacted in a strong manner and sent the National Guards to Minneapolis and other parts of the nation to quell the riots.

The imposition of curfew has not had any effect on the protests.Trump initially tweeted that “when looting begins shooting begins”.

As protesters began to protest outside the White House, he threatened to greet the protesters with the most vicious dogs and lethal weapons.

The protests come at a time when the US is already grappling with the menace of Coronavirus. The US has the highest number of cases in the world and has been battling a divisive population on the issue of how they have handled the situation so far.

At a time as grave as this, the above mentioned large scale protests are only adding fuel to the fire.

The administration needs to take immediate action to curtail and manage the angst.