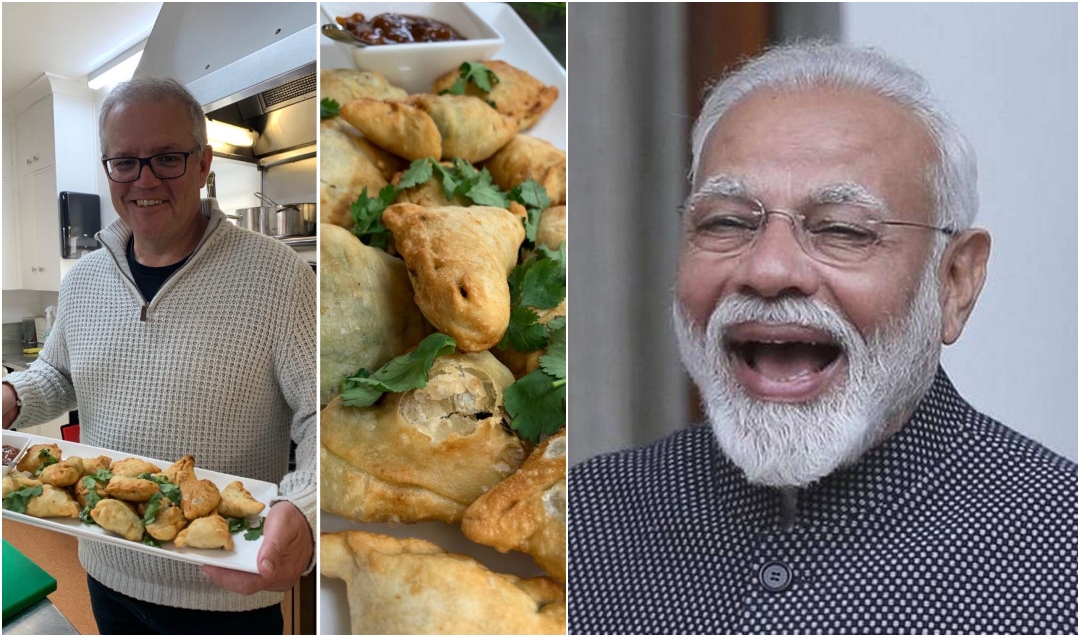 Prime Minister Narendra Modi was seen rejuvenating bilateral ties with Scott Morrison on Sunday shortly after his Australian counterpart shared images of ‘ScoMosas’–samosas made by him–and tagged the former on the social media post expressing his desire to share with him the popular Indian snack as well as a mango chutney made to go with it.

“Connected by the Indian Ocean, united by the Indian Samosa! Looks delicious, PM @ScottMorrisonMP! Once we achieve a decisive victory against COVID-19, we will enjoy the Samosas together. Looking forward to our video meet on the 4th,” the Prime Minister said in a tweet.

Once we achieve a decisive victory against COVID-19, we will enjoy the Samosas together.

Looking forward to our video meet on the 4th. https://t.co/vbRLbVQuL1

The two leaders are scheduled for a virtual meet on June 4. Morrison rued that he won’t be able to share ‘ScoMosas’ with PM Modi as they will be meeting via a video link.

Morrison said, “They’re vegetarian, I would have liked to share them with him.”

India and Australia are looking forward to deepening their strategic relationship, with a range of pacts from defence to trade in strategic sectors expected to be signed during the upcoming summit.

A local newspaper, The Australian reported last week that the new agreements will focus on reliable supply chains in key strategic sectors, including medical goods, technology and critical minerals.

The leaders will seal a new defence agreement allowing reciprocal access to bases and co-operation on military technology projects, while a new education partnership will be on the table to help overcome Australian university reliance on Chinese students.

The talks in terms of strategic convergence, now have greater significance as COVID-19 exacerbates the strategic contest between the US and China, and forces like-minded countries to seek out reliable partners.

The virtual summit follows the cancellation of Morrison’s planned state visit to India in January due to the bushfires.

Morrison said last year, ahead of his planned visit, that India was “a natural partner for Australia”, referring to the countries’ “shared values” — a point of differentiation with China.

Former Department of Foreign Affairs and Trade secretary Peter Varghese, who wrote a landmark report on the bilateral relationship in 2018, was quoted by the newspaper as saying that India would be even more important to Australia in the post-COVID world. “If one of the lessons from COVID is that countries need to spread their risk, then finding new markets or building up existing markets is a crucial part of that,” he added.

Varghese noted that India, a member of the Quadrilateral Security Dialogue along with Australia, Japan and the US, was a vital strategic partner to Australia in helping “constrain China’s ambitions to be the predominant power”.
“That shared objective between Australia and India of not wanting to see the region dominated by China is a key component of building up our geopolitical relationship,” he told The Australian.

Earlier this month, Australian Foreign Minister Marise Payne and Indian counterpart Subrahmanyam Jaishankar held talks over their country’s response to the pandemic and Australia’s call for an independent inquiry into Beijing, which was also overwhelmingly backed at the World Health Assembly.

Australia wants to support India to develop a domestic critical minerals processing industry, which would provide Western nations with an alternative to sourcing the materials from China.

Meanwhile, India has strong expertise as a manufacturer of drugs and medical equipment, while Australia is a centre of biomedical research, opening the possibility for closer co-operation in the key sector, the media reported further.