Did a man in Hyderabad set himself ablaze out of hunger and unemployment? Here’s the truth | Newsmobile
Friday, August 19, 2022

Home NM FACT CHECKER Did a man in Hyderabad set himself ablaze out of hunger and...
ShareTweetGoogleWhatsappPrint
Mail

A  video is doing the rounds on social media, in which a man can be seen on fire. Claims are being made that he set himself on fire due to hunger and unemployment. 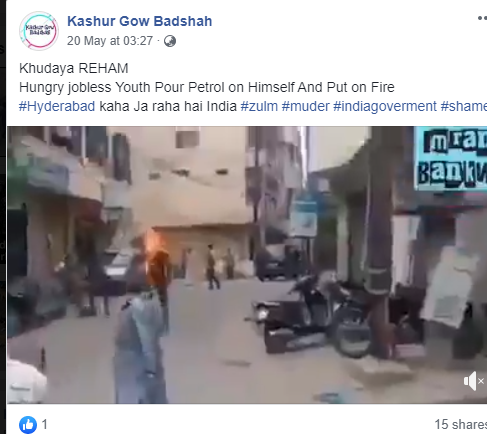 NewsMobile fact-checked the post and found the claim attached to the video to be false.

When we extracted keyframes of the video and put them through Reverse Image Search, we found the same video on Twitter with a claim that the man committed suicide after fighting with his wife.

A 30-year-old man attempted suicide after fighting with his wife. He poured petrol on his body, later set himself on fire at #Chintal in #Hyderabad. Locals saved him. However, domestic violence cases rose in the country during the #lockdown pic.twitter.com/xsKbI72Gqj

Taking a clue from the above tweet, we then ran another Reverse Image Search along with the keywords ‘Hyderabad’, ‘man’, ‘fire’ and ‘wife’.

We found a news report by Sakshi Post dated May 15, 2020, with the title, “Man Sets Himself Ablaze In Hyderabad’s Jeedimetla.” The featured image of the article was a screengrab of the video in question. 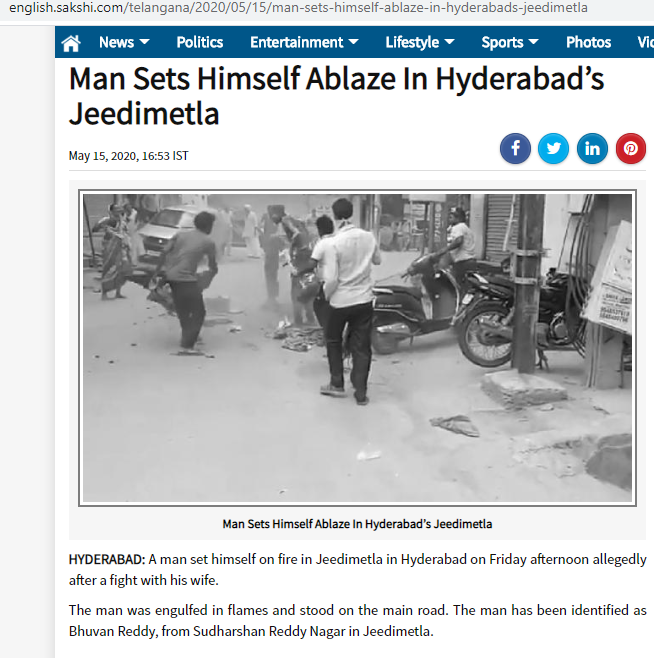 The incident was also covered by other media outlets like Telangana Today and Sakshi TV.

According to the report published in Telangana Today, the man was identified as Bhuvan Surya,  who was working as a sales executive in a private company. The report also suggested that he attempted to commit suicide after his wife refused to live with him.

Speaking to ANI, PV Padmaja, Deputy Commissioner of Police (DCP), Balanagar said, “Today 35-year-old Bhuvan Reddy set himself ablaze at his residence. He was upset after his wife refused to live with him. Twenty days ago a heated discussion took place between Bhuvan Reddy and his wife. The woman later went away to her sister’s residence.”

From the above information, we can deduce that the man in the video was not jobless and his reason for attempted suicide was different from the ones mentioned in the claims.
Hence, the viral claim is false.