A video is widely being shared on the internet which shows a clip of a story, run by a Hindi news channel, TV9 Bharatvarsh.

In the video, it is being claimed that a new virus has been detected in tomatoes in Maharashtra and that their consumption can lead to the spread of this virus in humans. The video also claims that it can be more fatal than the ongoing Coronavirus.

The caption of the video read: “Now Red Virus after Corona? So is this how it all ends? 🌝”

Now Red Virus after Corona? So is this how it all ends? 🌝 #TirangaVirus pic.twitter.com/dKWk4oT46Z

The video also claims that the Tiranga virus is a ‘new version of Coronavirus’.

NewsMobile fact-checked the above claim and found it to be fake and baseless.

Former Chief Minister of Maharashtra, Prithviraj Chavan, had also tweeted regarding the story run by the news channel.

A report about “#Tiranga_virus in tomatoes” in Maharashtra was broadcasted by a Hindi News Channel on 13 May. Prices crashed immediately and tomato farmers have suffered huge losses. Such irresponsible reporting must be punished. Govt must compensate farmers. (1/2) pic.twitter.com/yeeLaL7J9L

In the tweet, he called the reporting ‘irresponsible’ and asked the concerned authorities to take action against the organisation.

The State Govt must take legal action against the channel and also ask the @MIB_India to takedown the Channel for a month. Centre must issue an SOP & a Code for reportage. Any #CORONA related sensitive news must be put out only with prior approval from ICMR or Central Govt. (2/2)

He also suggested that the state government should ask the Ministry of Information and Broadcasting to take down the channel for a month for spreading the misinformation.

After the channel faced a backlash from the minister, agricultural experts and viewers on social media, the video was taken down. The channel ran another report on May 15 denying the statements that were made in the story and requested the viewers to stay alert and not fall for rumour mongers.

In this report, they also denied the fact that they made any statement regarding the tomato virus and COVID-19.

In other news, there is an unidentified disease that is causing early ripening of crops, leading to huge financial losses to farmers in Maharashtra but no human transmission or harm has been recorded. 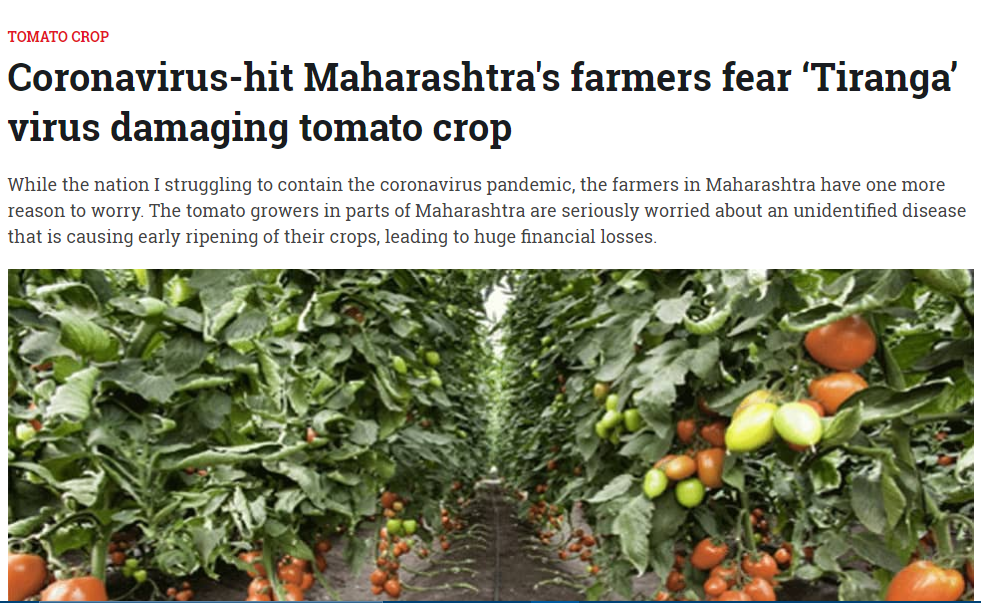 Hence, the above information proves that the disease in tomatoes is wrongly linked to Coronavirus.