(Translation: The houses of Dalit Hindus are being burnt in the Telinipara of Hooghly district of West Bengal.) 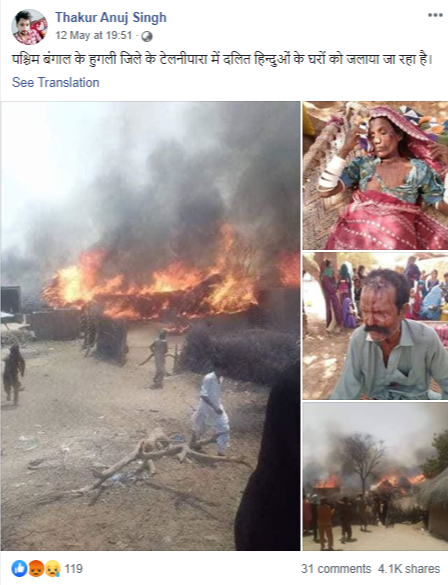 We put the images through Reverse Image Search and found a tweet with a similar man and woman featured in them. The caption of the old picture read that they were attacked by neighborhood in Chak No 121, Rahimyar khan, Punjab, Pakistan.

The tweet, dated May 10, 2020, also claims that the woman was sexually assaulted publically.

Another attack & Sexual Assault on Poor Non-muslim, Hindus. Gulab & his wife were attacked by neighborhood in Chak No 121, Rahimyar khan,Punjab, Pakistan. Both were not only injured but wife was sexually assaulted in front of general public to humiliate & force them to leave area pic.twitter.com/wxZC74HEJv

Replying to the above tweet, the official Twitter handle of Punjab Police, Pakistan, clarified that it was a land ownership dispute claimed by both Hindu and Muslim families. They also informed that the case has been filed and the accused have been arrested.

“It is primarily a land ownership dispute claimed by both Hindu and Muslim families, on which the parties clashed and the medical reports of the injured are being processed, after which further legal action will be taken, ” Google translation of the tweet read.

As for the pictures of burning houses, we found several tweets with claims that ‘21 houses of Hindus are burnt in Tadados, Tharparkar, Sindh’.

A report coming from #Tharparkar Near Border area of Sindh
Around 21 houses of Hindus are burnt in Tadados, #Tharparkar, Sindh

The source says that some people, including children are burnt & in critical condition.

#BREAKING,21houses of Hindus were burnt down in an operation by #PakistanArmy in #Tharparkar bordering #Sindh.
Many people,incl children burnt& are in critical condition.
Being #Hindu in #Pakistan is curse & is state Sponsored ethnic cleansing.#SaveUsandHindusFromPak#Covid_19 pic.twitter.com/KipBzUS72Z

Some claimed the incident took place in Balochistan.

NewsMobile independently couldn’t verify the origin of the picture.

On another front, violence did erupt in Telinipara in West Bengal’s Hooghly district over the movement of people in containment zones. Section 144 of the Criminal Procedure Code (CrPC) was imposed in the area on 12 May.

However, the pictures used in the above posts are from Pakistan and not India. Hence, the post is misleading.