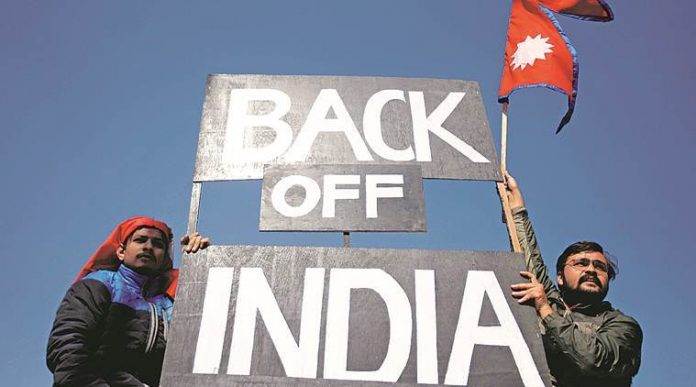 India and Nepal have seen their border dispute related to Kalapani heat up since 2019 when the Geological Survey of India published new maps which also included Kalapani. These new physical and political maps were necessitated after the Parliament passed the Jammu and Kashmir (Reorganization) Act, 2019.

On May 8, Defence Minister Rajnath Singh inaugurated the road leading to the Lipulekh pass close to Kalapani which will facilitate direct entry of pilgrims who are participating in the Kailash Mansarovar Yatra. Nepal immediately registered a mark of protest and Foreign Minister Pradeep Gyanwali said that the nation will protect its sovereignty and territorial integrity. In addition, troops are being sent to the border to deal with the issue.

Foreign Minister Hon. @PradeepgyawaliK conveyed Government of Nepal’s position on boundary issues to Ambassador of India to Nepal H.E. Mr. Vinay Mohan Kwatra at a meeting held at MoFA today and handed over a diplomatic note in this regard.

Let us understand this issue in detail,

Where is Kalapani located and what is its strategic significance?

Kalapani is located in the Pithoragarh district of Uttarakhand, which shares a border with Nepal. Nepal claims that the territory is part of its Darchula district.

It is 372 Square Kilometres.

The Mahakali River runs through the place.

It is located at the tri-junction of India, Nepal and China.

The Lipulekh Pass lies in this region. It is one of the passes connecting India and China on the Himalayan ranges.

The distance to the Kailash Mansarovar in Tibet Autonomous Region is shortened by this Pass.

What is the dispute between India and Nepal?

British India and Nepal signed the Treaty of Sugali in 1813. According to this treaty, the Mahakali river that runs through the place is the settled border between the two nations.

The problem began when the British surveyors located the tributaries of this river across different places, thus obfuscating the origin of this river.

Nepal claims that the area lying west of the disputed river is where the origin of the river is and thus claims the entire territory.

However, India has claimed a different origin and has included the entire territory as part of its territory.

During Prime Minister Narendra Modi’s visit to China in 2015, the two nations agreed to open the Lipulekh Pass and increase trade and commerce through it.

This prompted serious protests in the Nepalese Parliament and the government was forced to clarify that the sovereignty of Nepal will not be permitted to remain affected.

What will happen now and how will this affect Indo-Nepal relations?

Any escalation over this issue may affect bilateral ties between the two countries. India and Nepal already have a border dispute mechanism to discuss these issues. This issue is emotive in Kathmandu and has the potential to trigger violent anti-Indian sentiments.