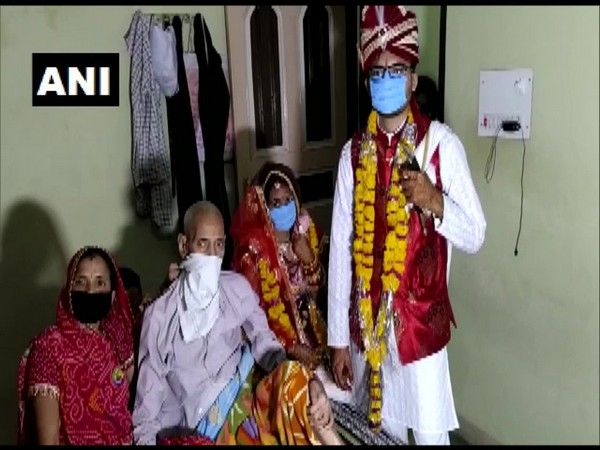 Indore (Madhya Pradesh) [India], May 2 (ANI): A couple entered into wedlock in Gautampura, Indore on Friday amid the lockdown after groom’s father, a cancer patient expressed his desire to see his son getting married.
Santosh Chauhan, father of Ayush Chauhan took permission from the district administration two days ago, to get his son married. Following which the administration granted permission to organise the event win presence of only five guests.
S Chauhan, elder brother of the groom, Ayush said, “My father is a cancer patient, it was his wish to see his younger son getting married. We were granted permission by district administration”.
“We talked to the bride’s family and also held discussion with our family members, following which we decided to arrange this event. We also informed and took permission from the district authorities for the wedding. We followed social distancing, wore masks and used sanitizer during the wedding,” he added.
Ayush was already engaged to Babli, who is also a resident of Gautampura. Their marriage was scheduled for later this year. Groom’s 85-year-old grandmother also wanted to see his grandson tying the knot in front of her.
Local administration officials also attended this wedding and ensured that lockdown rules are being followed by everyone and along with the envelope, they gifted masks and gloves to the couple.
One of the guests told ANI, “Many weddings were cancelled amid lockdown this year. This wedding was organised today because Ayush’s father is very ill and he is also suffering from cancer. He wanted to see his son getting married so he took permission from the authorities. This wedding took place following all the norms of lockdown.”
The temple where the wedding was organised, was first sanitised by the municipal authorities.
When Ayush along with her wife, Babli was returning home after getting married, the locals here showered flower petals from their terrace while some of them welcomed the couple by clapping and banging plates. (ANI)