Home Uncategorized By Tuesday, 21 districts of Telangana will not have a single COVID-19...
ShareTweetGoogleWhatsappPrint
Mail 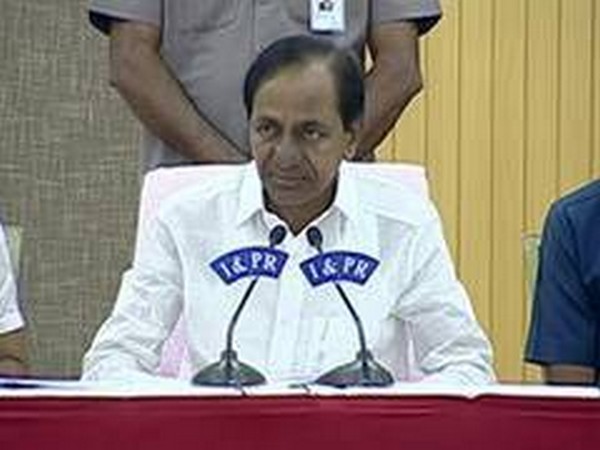 Hyderabad (Telangana) [India], April 28 (ANI): Telangana Chief Minister K Chandrashekar Rao has said that 21 districts in the state would turn to be COVID-19 free by Tuesday.
“Rao said that the decrease in the spread of coronavirus in the state is an auspicious sign and opined that there were clear indications that Telangana would become corona free State in a few days to come. The Chief Minister declared that by April 28, 21 districts in the State would turn into the districts without even one corona positive case,” said a statement from the Telangana CMO.
According to the statement, Rao said it was a good development that 97 per cent of the corona patients are getting discharged after recovery. The Chief Minister also declared that since there is a decrease in coronavirus spread and its impact, there would be a gradual reduction of the containment centres in the State.
He also said that the link between those who went to Markaz and those came in contact with them was established and testes are being conducted on them. There is no need for people to worry about anything. For the past few days, if the trend in the state is observed, the virus spread has been on the decline.
The Chief Minister held a high-level review meeting at Pragathi Bhavan here on Monday after his video conference with Prime Minister Narendra Modi.
Medical and Health Minister Etela Rajender, Home Minister Mohammed Ali, TRS Parliamentary Party leader Dr K Keshav Rao, Government’s Chief Advisor Rajiv Sharma, Chief Secretary Somesh Kumar, DGP Mahender Reddy, Principal Secretaries Narsing Rao, Shanti Kumari, GHMC Commissioner Lokesh Kumar, former Speaker Madhusudhan Chary and others participated in the meeting.
The Chief Minister held an in-depth and a lengthy review on the spread of coronavirus in the State, treatment being given to the patients, services, implementation of lockdown and other issues. Medical officials told the Chief Minister that there was a steep decline in the people affected with the coronavirus in the State for the past few days. On Monday, when the tests were conducted on 159 people, only two turned out to be positive. 16 people were discharged on Monday.
Speaking on the occasion, the Chief Minister said that the virus spread could be successfully contained in the state due to the strict implementation of lockdown. He said the virus spread initially for many areas from those who came from abroad and later from those who went for the Markaz prayers.
By Monday, there are 1003 who tested positive for the virus in the State, of this 322 were discharged after recovery. As on date, there are 646 cases in the State.
In ten districts — Mulugu, Bhadradri, Kothagudem, Narayanpet, Warangal Rural, Wanaparthy, Nagar Kurnool, Mahabubabad, Siddipet, Yadadri, Bhongir, and Mancherial — there is not even a single positive case. Of another 11 districts — Jagtial, Jangaon, Peddapally, Sangareddy, Jayashankar Bhoopalpally, Kamareddy, Mahboobnagar, Medak, Rajanna Sircilla, Karimnagar, Nalgonda — by Tuesday (28 April) would become districts without a single positive case.
The government is reducing the containment centres where the cases are on a decrease. Among those affected with the virus in the state, a large majority of their quarantine time ends by May 8. The virus spread is on a steep decrease for the past several days. “Confidence is growing that in a very few days there will not be a single positive case in the State. Even after this, if a case or two is detected, there will be no difficulty in getting those cases treated,” said the CM.
“The government is working with a perfect strategy to contain the virus. Medical and health department and the police are putting in a lot of hard work to identify those affected with the virus. Initially, it is known that the virus spread with those arriving from abroad.”
“The government will not be complacent as there is a decrease in positive cases. We are alert all the time. The Medical and Health Department is ready to face any eventuality or eruption of cases. Testing kits, PPE kits, N95 masks, tablets, instruments, beds all are ready. We are prepared to give treatment to any number of cases,” said Rao.
“The lockdown in the state will continue till May 7 as announced earlier. People should cooperate with the guidelines. Please do not come out unless it is very urgent and necessary. People from all the faiths should offer their prayers and celebrate their festivals at home. We will reduce containment zones where there is a decrease in the positive case and where there are no active cases. But people and officials in containment areas should be on high alert,” urged the Chief Minister. (ANI)