After the 9 pm 9 minutes initiative by Prime Minister Narendra Modi to spread positivity during these trying times, a video has surfaced on the internet, in which one can see lights being flashed from roofs along with firecrackers.

It is being claimed that the video is from Sunday’s 9 pm 9 minutes initiative, when people in India were supposed to turn off the lights and light diyas and candles. 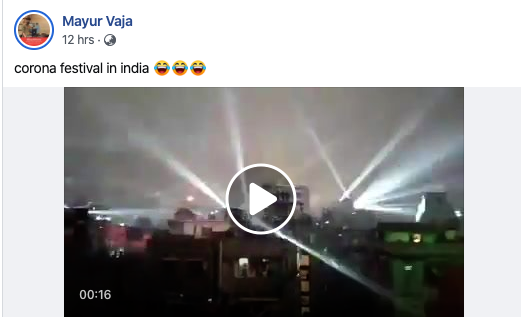 At the time of filing this report, the above video was shared by over 1,000 Facebook users.

Our attention was drawn towards one of the comments on the post, according to which, the video is from a kite festival in Dhaka.

We then extracted the keyframes of the video and on putting them through Reverse Image Search and using relevant keywords, we found several similar videos which were from Dhaka’s Sakrain Festival which took place on January 14, 2019.

On closely analysing all the videos, it was established that the video in circulation is from the same event that took place in Dhaka.

Hence, the above information proves that the claim attached to the video is false as the video in question is old and it is NOT from India.