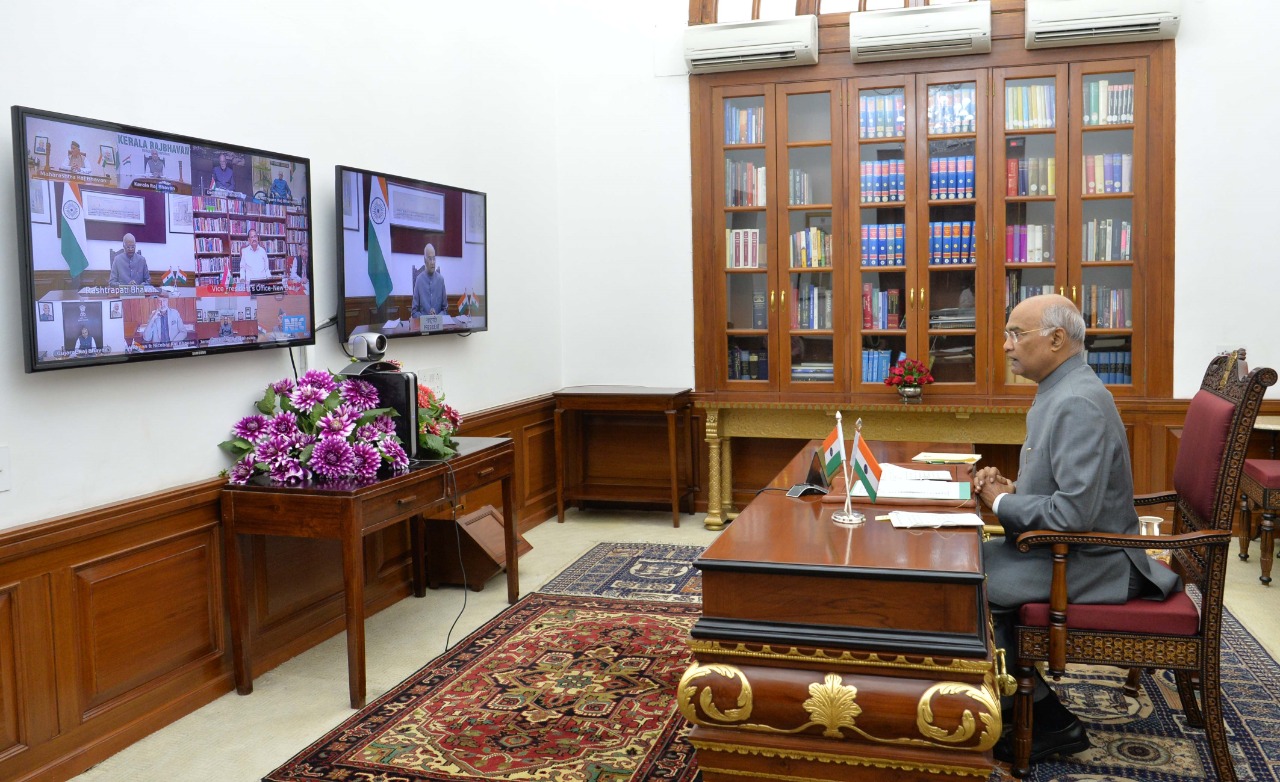 President Ram Nath Kovind, along with Vice President M. Venkaiah Naidu on Friday held a video-conference with all Governors, Lieutenant Governors and Administrators of all States and Union Territories to find ways to complement the efforts of the Union Government and State Governments in meeting the challenges due to coronavirus outbreak.

The President began the conference by exhorting to the collective strength of the society and urged Governors, LGs and Administrators to mobilise volunteers of Indian Red Cross society, voluntary and religious organisations to contain the menace at the earliest.

President Kovind and Vice President Naidu expressed hope that the Indian society’s inherent strength of “sharing and caring” and the government’s measures would mitigate the sufferings of the most vulnerable sections of the society, particularly the workers of the unorganised sectors and the destitute.

In the video-conference, 14 Governors and Delhi Lt. Governor were shortlisted to share experiences in their territories as these areas were worst affected by the pandemic.

The video conference was conducted by the Vice President and it brought out the best practices initiated by various States to mitigate the people’s plight while enforcing the lock down in the country.

375 Psychologists are also roped in to give advice to those who find quarantine as a difficult phase in their lives.

Karnataka Governor Shri Vajubhai Vala extolled the collective strength of the society to fight the menace. Almost 8000 Red Cross Society volunteers in the State are working to spread awareness about the disease. Akshay Patra, a social organisation, is also actively involved in distributing food packets all over the state.

Lt Governor of Delhi Shri Anil Baijal said that the State government and all other agencies were working in perfect coordination to enforce the lockdown and yet mitigate people’s problems.

Gujarat Governor Shri Acharya Dev Vrat said that quarantine facilities in the State were being augmented. Gujarat’s cooperative spirit is invoked to launch concerted efforts by government, social and religious organisations, private sector, voluntary and cultural organisations to pool in their resources to meet the challenge.

Governor of Telangana Dr Tamilisai Soundararajan informed that necessary steps are being taken in the State. She said that the State is extensively using social media to spread awareness.

West Bengal Governor Shri Jagdeep Dhankhar- informed that Universities in the State are ready to be utilised in case of need. Further, Red Cross has been doing an excellent job in educating people about deleterious impact of the disease, within the limitations of their resources.

Himachal Governor Shri Bandaru Dattatraya said that the Red Cross society has been working round the clock to help out people in the state. Special efforts are being made to ensure awareness in Districts with Tribal population.

Bihar Governor Shri Phagu Chauhan talked about Bihar’s proximity to the international border that makes the state rather vulnerable to the spread of the disease. He however praised the manner in which the Bihar Government has been acting to contain the Coronavirus.

Tamil Nadu Governor Shri Banwarilal Purohit informed that efforts are in place to look after construction workers by providing them Rice, Dal etc. Amma canteens are being used to provide subsidised food.

Madhya Pradesh Governor Shri Lal Ji Tandon praised quick response of the MP state administration. The state has taken measures to ensure that food is made available to daily wagers.

Punjab Governor and Administrator of Chandigarh Shri V. P. Singh Badnore informed that Red Cross has been helping to supply food packets in Chandigarh. Necessary steps are being taken by Punjab and Chandigarh to tackle the challenge posed by COVID-19.

Rajasthan Governor Shri Kalraj Mishra, informed that a fund has been created to enable people to make donations. All institutions are contributing in dealing with the challenge and social distancing being duly emphasised among people.

While summing up the conference in which 15 governors including Delhi LG and Chandigarh administrator, shared their thoughts, President Kovind urged everyone to hold regular stock-taking with the state government and make contributions in a way that the battle again the Coronavirus could be taken to a logical end. He also said that based on these experiences, the best practices can be emulated in other parts of the country.