Home Music & Entertainment Bollywood Thank you for taking me to spectacular Taj Mahal: Ivanka to Diljit... 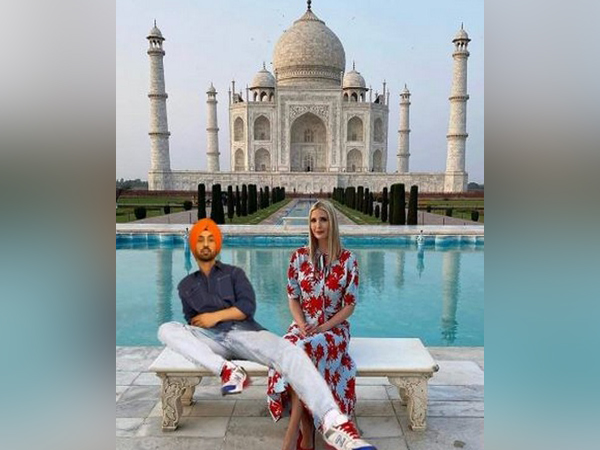 US President Donald Trump’s daughter Ivanka Trump on Sunday gave a humorous reply to Punjabi singer Diljit Dosanjh’s social media post as he shared a photoshopped picture where he is seen sitting with Ivanka in front of the Taj Mahal.

The ‘Good Newwz’ actor shared a picture with a humorous caption in Punjabi joking that Ivanka insisted on being taken to the Taj, and he had to reluctantly oblige.

Thank you for taking me to the spectacular Taj Mahal, @diljitdosanjh! 😉

It was an experience I will never forget! https://t.co/VgqFuYBRIg

The post received immediate attention from Trump’s daughter and she replied to the post on Twitter that read, “Thank you for taking me to the spectacular Taj Mahal, @diljitdosanjh! It was an experience I will never forget!”

To which Diljit replied: “OMG Athithi Devo bhava Thnx @IvankaTrump I Tried Explaining Everybody that it’s not a Photoshop See You Soon … Next Visit LUDHIANA For Sure. HUN KARO GAL (Who was saying what now?).”

Ivanka not only took note of the humorous post by Diljit but also shared the photoshopped version of ‘Taj Mahal’ pictures and wrote, “I appreciate the warmth of the Indian people. …I made many new friends!!!

I appreciate the warmth of the Indian people.

…I made many new friends!!! https://t.co/MXz5PkapBg

In one of the pictures, Ivanka is seated on the backseat of a cycle while, in the second picture she is standing along with Manoj Bajpai, followed by the third one where she is seen seated close to a guy, who has put his arm on Ivanka’s shoulder.

Diljit also couldn’t contain his excitement for the reply received by Trump and he further shared the reply with a hilarious post by sharing a screenshot of the reply on Instagram, and jokingly wrote “Sado HUN SADO Mere ton … Jehde Photoshop Keh Rahe c ..Aa Geya @ivankatrump Da Jawab EH DOSANJHANWALA BUGGE. (Whosoever was claiming the picture was photoshopped, here I received her reply).”

This is not the first time Diljit has shown his interest in a famous western celebrity. He often shares funny posts about famous women, and his love for American personality Kendall Jenner is known by everyone.

Diljit was last seen in ‘Good Newwz’ alongside Kiara Advani, Akshay Kumar, and Kareena Kapoor Khan. The movie was a hit on the box office. He will next be seen with Manoj Bajpayee and Fatima Sana Shaikh in ‘Suraj Pe Mangal Bhari.