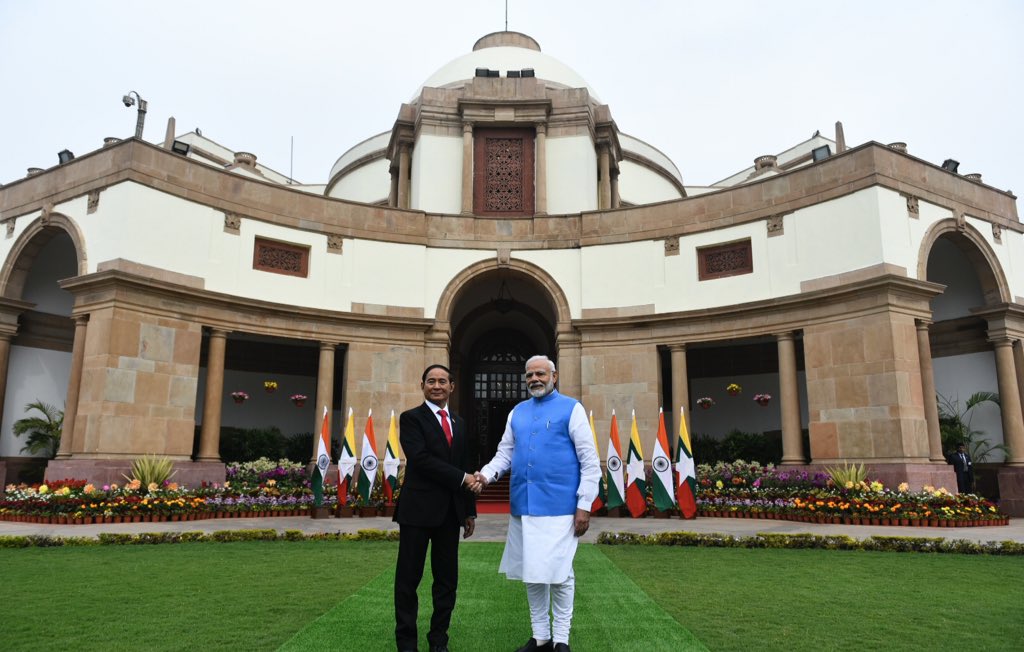 The visit of the Myanmar President U Win Myint and the First Lady Daw Cho Cho to India from February 26-29, 2020 will be significant in many ways and is not just another high- level visit from a neighbouring nation.

Let us understand the significance of this four-day visit to the relationship between the two nations,

Background to the visit

The two nations share a border extending to almost 1600 kms. The Indian states of Arunachal Pradesh, Manipur, Nagaland, Mizoram and Tripura share a border with Myanmar.

The relations between India and Myanmar has been growing in recent times. Some of the important facets of this relationship are trade and connectivity, development cooperation and cultural relations.

In matters of connectivity, the two nations are pursuing connectivity projects such as the India-Myanmar-Thailand highway project, the Kaladan Multi-modal transit link project amongst others.

The bilateral trade, though is well below the potential and is currently a little less that USD 2 billion.

The development assistance provided by India is well over USD 2 billion and India is a partner of Myanmar and the two nations share a shared destiny in terms of development and national building. India has established various skill development centres focusing on English language training and capability enrichment in various IT skills.

India has also extended aid in terms of housing projects, road development projects, community centres and others in the Rakhine state of Myanmar.

The province is also the epicentre of the Rohingya refugee crisis and under Operation Insaaniyat, India has from time to time extended assistance to the people and has played a leading role in defusing the tensions over the crisis.

However, there are two primary concerns as far as India is concerned.

First is the issue of Myanmar’s lackadaisical attitude as far as pursuing the insurgents from North East India are concerned. Many of the groups such as the NSCN, ULFA and other groups carry out cross border attacks into India from Myanmar and this is a major issue between the two countries.

Secondly, the relations between Myanmar and China. China is developing certain critical ports in Myanmar such as the Kyaukpyu, Sittwe and others.

In the recent visit of Chinese President Xi Jinping to Myanmar, the two countries signed more than 50 agreements and this has only shifted the focus towards China’s unsustainable and debt trap diplomacy.

It is in this background that the Myanmar President is visiting India.

Who is accompanying the President and what is the schedule like?

The President and the delegation received a ceremonial welcome at the Rashtrapati Bhavan and paid their respects at the Raj Ghat then onwards.

The President will meet Prime Minister Narendra Modi at the Hyderabad House and the External Affairs Minister of India and the Vice- President of India will also call on the visiting dignitary.

The President will then proceed to Agra and Bodh Gaya before leaving for Myanmar.

Significance of the visit

The two nations are expected to sign six Memorandum of Understanding (MOU) in the following:

>Cooperation in tiger conservation in Hukaung Valley, graphs to be issued by India for the projects,

> India’s assistance for development of MraukU and Gwa Townships in Rakhine State,

> Road construction in Buthedaung Township in Rakhine State and

It is expected that this visit will herald a new beginning in the relations between India and Myanmar and India’s concerns related to its security will be addressed.