While Delhi is trying to cope with ongoing communal riots, a picture of a Jafrabad shooter is being shared online with several pictures of another man claiming that they are the same and his name is Anurag Mishra. 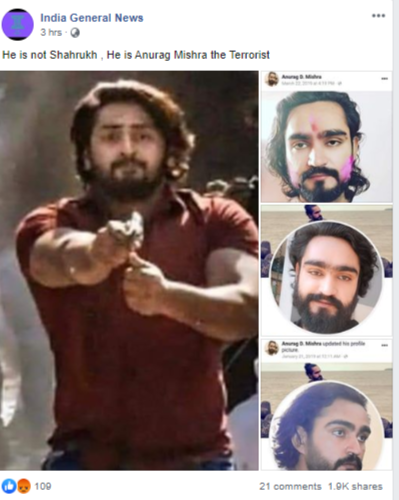 Firstly, we checked and found that the Delhi Police identified the man in the red t-shirt as Shahrukh.

“Delhi Police: The man in a red t-shirt who opened fire at police during violence in North East #Delhi today has been identified as Shahrukh, ” newswire ANI’s tweet dated Feb 24, 2020, read.

Delhi Police: The man in a red t-shirt who opened fire at police during violence in North East #Delhi today has been identified as Shahrukh. pic.twitter.com/xeoI7KpBPh

Moreover, we checked the Facebook profile of the man whose pictures are being circulated.

Sharing a similar post, Anurag D. Mishra rubbished the claim, saying that the news is false and he will be filing a case against people who are circulating this fake news.

He also uploaded a video stating that he will be filing a complaint against everyone who is calumniating him.

The above information proves that the viral post is FALSE.