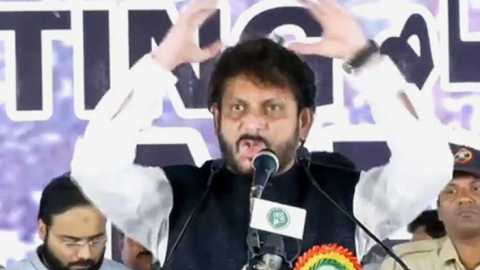 AIMIM leader Waris Pathan on Thursday said that there are 130 crore people in this country and they (referring to the Muslim community) are part of India and alleged that the Bharatiya Janata Party wants to segregate them.

Responding to a question on his statement Pathan said, “This is a figment of imagination, they did not find anything controversial so they started showing the video, there are 130 crore people in this country and we are part of it, BJP wants to segregate us.”

#WATCH AIMIM leader Waris Pathan: …They tell us that we’ve kept our women in the front – only the lionesses have come out&you’re already sweating. You can understand what would happen if all of us come together. 15 cr hain magar 100 ke upar bhaari hain, ye yaad rakh lena.(15.2) pic.twitter.com/KO8kqHm6Kg

He said that both Prime Minister Narendra Modi and Waris Pathan have equal rights in this country and reiterated that the BJP had an ulterior motive.

“We are an integral part of this country. Modi and Waris Pathan both have equal rights on this nation,” he said.

“Why these BJP leaders are making such comments against protesters,” he asked.

ALSO READ: ‘The country belongs to everyone’, Pawar demands trust for mosque in…

He said that AIMIM is always for the betterment of the minorities and we will not speak against the constitution. “Whatever I have said, said in the limits of Constitution,” he said.

He said Waris Pathan is the last person who will speak against any religion or the country.

“My statement is being misconstrued and twisted. I am not apologizing. It is BJP which is trying to segregate Indians,” he said.

Waris Pathan was on Wednesday reportedly quoted as saying, “The time has now come for us to unite and achieve freedom. Remember we are 15 crore but can dominate over 100 crores.”