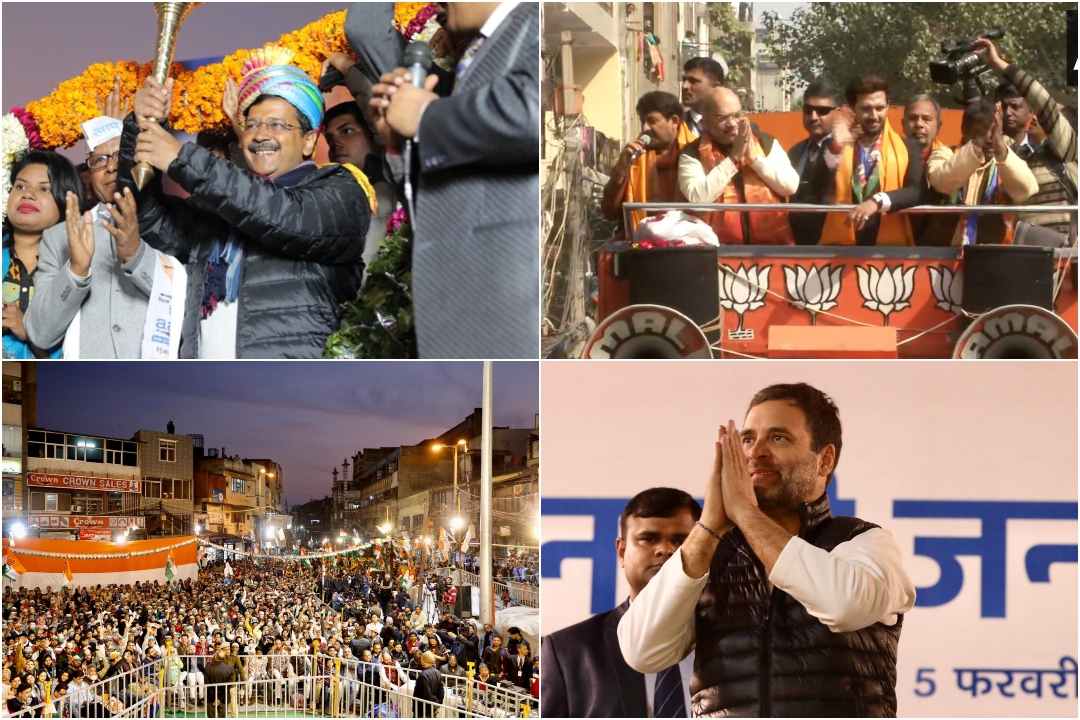 Campaigning for the Delhi Assembly elections, scheduled for Saturday (February 8), will come to an end at 6 pm today.

The campaign was marked by aggressive blitzkrieg between Aam Aadmi Party (AAP) and Bharatiya Janata Party (BJP), while Congress too left no stone unturned to make the contest triangular.

While campaigning was headed by none other than Amit Shah for the BJP, the AAP, on the other hand, remained mostly dependent on Chief Minister Arvind Kejriwal. The Congress, which didn’t win even a single seat in the last Assembly polls, pinned hopes on Rahul Gandhi and Priyanka Gandhi Vadra.

The BJP, which could only manage three seats in the last Assembly election, remained aggressive throughout the campaigning, which witnessed rallies by party bigwigs like Chief Ministers Yogi Adityanath, Manohar Lal Khattar, Vijay Rupani, Union Ministers Rajnath Singh and Anurag Thakur among others.

For AAP, which marked a historic win in 2015 polls by winning 67 out of 70 seats, Kejriwal remained at the forefront along with other party leaders like Sisodia.

The heated poll campaign in Delhi witnessed AAP outlining the work done, primarily in the field of health and education. BJP focused on the central government’s achievements and projected the Prime Minister’s image to seek votes.

Congress, on the other hand, attempted to remind the citizens of Delhi about the welfare and development work done by former chief minister Sheila Dikshit under her 15 years of rule and revolved their campaign around ‘Congress waali Dilli’.

Elaborate security arrangements have been made for the smooth conduct of Assembly polls with the deployment of 190 companies of Central Armed Police Forces (CAPF).

Also, 19,000 Home Guards and 42,000 Delhi Police personnel will be deployed at polling booths. The counting of votes will take place on February 11.